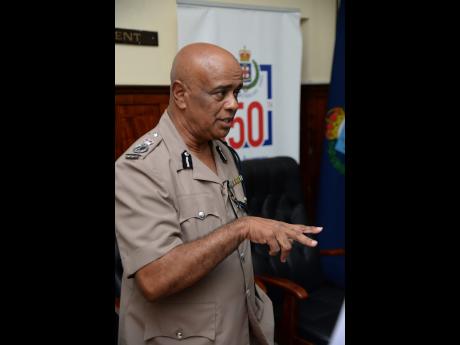 George Quallo, Jamaica's police chief, has signalled that the security forces will be moving to take control of some of the most volatile communities across the island as part of the short-term measures to help stem the wave of murders that left a trail of 54 bodies in the last week alone.

Describing last week's murder tally as frightening, the commissioner announced yesterday that the police will be establishing a permanent presence in these communities "to protect citizens while we work to flush out criminal elements".

The announcement comes amid mounting concerns about the country's soaring murder rate, which is up 19 per cent when compared to the corresponding period last year. According to Quallo, a total of 628 persons have been murdered since the start of the year, compared to 536 for the similar period last year.

He said the figure for this year includes 45 multiple killings which claimed 100 lives.

"There were 37 double murders, six triple murders and two quadruple murders. This underscores a high level of wantonness and brutality," the police commissioner underscored.

Two features of the latest upsurge in the violence, he said, were that gangs accounted for 70 per cent of the murders recorded this year, and that there was a high recurrence of murders in crime hot spots, "suggesting that the killings are not random".

As a result, Quallo, in his first press conference since taking office in April, sounded a warning that the police, in the short term, will be relying heavily on the anti-gang legislation and the special powers provisions included in the Constabulary Force Act to address the issue.

"This will allow for cordons and searches, curfews and detentions for preventative and investigative purposes," he underscored.

The commissioner emphasised that the men and women under his command have been instructed to ensure that they adhere to the safeguards that are in place to protect the fundamental rights of citizens.

"We will place great emphasis on police professionalism, discipline and respectful treatment of all. This is non-negotiable," he declared.

The police chief acknowledged that the measures are not entirely new, but said Jamaicans can feel confident that they will bear fruit. "What is different about this is how it will be applied and the energies that we bring to it," he told journalists.

Quallo added, "We have a workforce that is far more motivated and we are committed to the task at hand, and I am convinced that there will be a difference in the very near future."