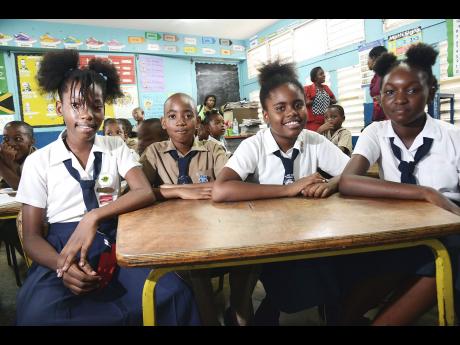 Being homeless before the beginning of the school year and losing family members to the gun were some of the horrendous experiences at least two students at the Allman Town Primary School in Kingston had to overcome as they prepared for the Grade Six Achievement Test (GSAT).

That they did as both earned places at the school that was their first choice.

Vanessa Hanson was one of those students. She shared that she conquered the hurdles, receiving a 92 per cent average, and will be moving on to the Wolmer's Girls' School in Kingston.

"I had a fire June 28 last year, and it was very sad. We ended up being homeless, and we had to go back to St Thomas to stay with my auntie. My mommy was trying to find somewhere for us to go, and luckily, she got somewhere in Kingston," Hanson told The Gleaner. "My grades fell, but my teacher pushed me. I also didn't expect to get my first choice because I had challenges with communication task. I thought I had failed it."

Mikayla Reid, whose father was shot and killed at the beginning of the school year, was successful in the Grade Six Achievement Test after gaining an average of 89.75 per cent. She was placed at her first choice as she gained a place at the St Andrew High School for Girls.

"He (father) was always there. He didn't live where we lived, but he would be at my house every single day," recalled the Allman Town Primary student.

"It was hard because my mother started to have financial challenges, and I used to think that my teacher didn't like me because she was always on my back. But at the end of the day, I really found out that it was to motivate me."

Reid added, "Math was very challenging. Most of the time I had to ask my friend to help me. Mommy would get home very late at nights because she worked at a call centre, so I had to study by myself, with no one to help me, really."

studies, 89 in language arts, and 100 per cent in communication task.

The teachers at the Allman Town Primary also boasted about their top students, Rianna Salmon and Shaquille Ramsey, who gained 96 per cent and 96.75 per cent, respectively. Rianna was placed at the Immaculate Conception High School, while Shaquille will be moving on to Wolmer's Boys' School.