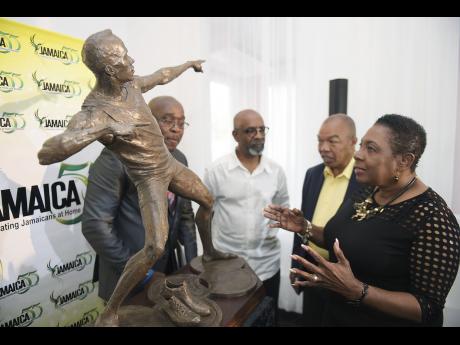 Basil Watson, the sculptor placed at the centre of the controversy surrounding the statue of sprint king Usain Bolt, says he carries no hard feelings for those who have unfairly attacked him in the aftermath of a fake image of the statue circulating online.

Speaking with The Gleaner after the unveiling of the latest maquette of Bolt at the Spanish Court Hotel in St Andrew yesterday, Watson said the initial backlash did not mean much to him, though persons have called him to express concern.

"It probably was complimentary that people would try to use fake news or [associate me] with it," the sculptor quipped. "It was more hilarious than anything else."

Watson, having sculptured the likes of Olympian Herb McKinley, said the quality of work he had put into the Bolt statue was up to his usual standard and he was confident of the outcome.

"Whether that is accepted or not, I know I have met my target, and that is what is important," he contended.

Sports Minister Olivia Babsy Grange, in an attempt to quell mounting concerns over the statue, unveiled the maquette of the statue of Bolt. She said the final statue will be ready for August to coincide with the Independence celebrations.

Grange also used the opportunity to defend the integrity of Watson.

"There is no way Basil Watson - who has sculptured Herb McKinley - would have sculptured the statue that has been circulating on social media causing public concern. That is just fake news," she said.

Last week, a firestorm was created on social media following the surfacing of an image purporting to depict the specially commissioned statue of Bolt.

The sports minister also expressed concern about controversies surrounding the work of artists and sculptures within the creative industry.

"An artist can interpret however he wants to. He is free to do that. I don't think the public is being fair to an artist when they see an image and get unhappy with it. That is the artist's interpretation of the subject," she insisted.

Just recently, the University of the West Indies came under fire for a bust of National Hero Marcus Garvey, which the university commissioned for its Faculty of Humanities at the Mona campus in St Andrew.

That statue, sculpted by artist Raymond Watson, has angered many persons, triggering an online petition for the bust to be removed.