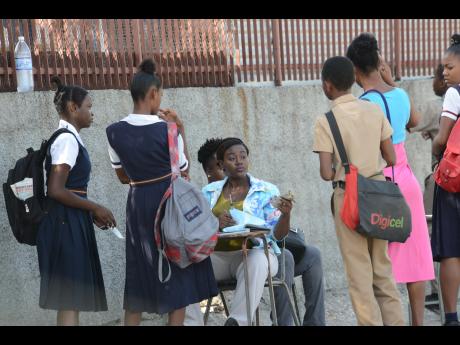 Rudolph Brown
A member of staff at St Andrew Technical High School (centre) collecting late fines from students just over one week ago. 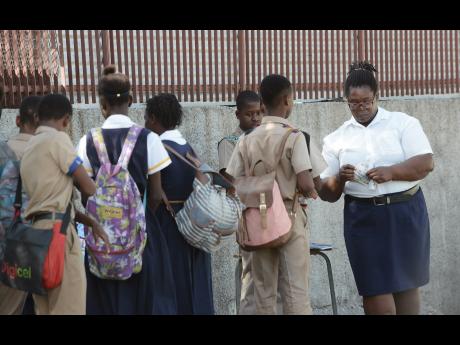 Obviously unimpressed by claims from the leadership of St Andrew Technical High School (STATHS) that a $50 fine imposed on students who arrive late is not compulsory and that the money is used for students' welfare, the education ministry has ordered an immediate end to the scheme.

Education Minister Ruel Reid last Thursday told a Gleaner Editors' Forum that he instructed the administration of the Spanish Town Road-based school to stop the practice.

According to the minister, the system of asking the students to pay a fine or opt for detention for arriving more than 40 minutes late is not supported by the Code of Regulations governing the running of public educational institutions.

"If the law doesn't specify, you can't interpret that the laws allow you to implement certain sanctions. Laws are there to guide the schools as to what is permissible.

"Any attempt to interpret is a misinterpretation, and even with disciplinary action for teachers, it is only after you would have had disciplinary hearing where the teacher could be subjected to a $50 fine," the minister pointed out.

No barriers to education

In his initial reaction to the fine, Reid had told The Sunday Gleaner that the Government's position is free access to public education, and there ought not to be any fees or any other creative barriers used to prevent and deny children their right.

The education minister went further last week as he addressed Gleaner editors and reporters at the company's North Street offices. "It was not something that the ministry was aware of by policy, and to the extent that we heard about it, we have had to take a position that it is not a position of ours. Yes, we told them to stop it," he said.

While noting the performance of principal Rayon Simpson, who is credited with leading an impressive turnaround at the Westmoreland-based Belmont Academy, before returning to his alma mater, STATHS, at the start of this year, Reid said this was a matter in which the ministry has to provide guidance to the school.

Simpson recently confirmed that STATHS students are asked to pay $50 once they arrive at school after 8:10 a.m.

According to Simpson, the policy was ratified by the SATHS Board of Governors in January after consultation with the parent-teacher association (PTA), and the education ministry was written to and informed of the decision before it was implemented.

"I do not wish to say whether or not the ministry responded to our written communiquÈ, but I am confident of its knowledge regarding this matter as we have been having ongoing and respectful dialogue," said Simpson in an emailed response to questions from The Sunday Gleaner.

"We have a functional board that holds the principal to account, and we have been able to show the stakeholders empirical data to prove that since implementation of the late fine, not only punctuality but attendance has improved exponentially.

The principal further argued that the money collected from the students goes towards the school's welfare programme as well as the behavioural modification programme, including a behaviour modification camp which is convened during holiday periods.

"And most significantly, to defray cost for a bulk-messaging system (in partnership with Digicel) whereby we will be able to mass-message parents of latecomers, to send wake-up messages each morning and to send reminders regarding homework, PTA meetings, etc," said Simpson.

Nadine Wilson-Harris contributed to this story.