Oh No! Not again! - Clarendon residents facing severe losses from flood waters for the second time in less than a month 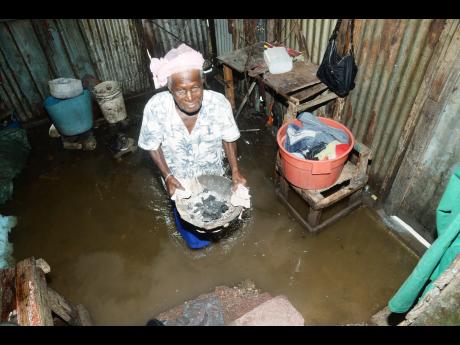 Jermaine Barnaby
Etta Henry has no where to put her small coal stove in her flooded kitchen in Rocky Point Clarendon. 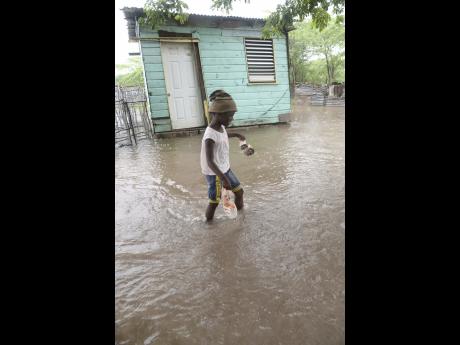 Jermaine Barnaby
A young girl puts herself in grave danger as she crosses the floodwaters in her yard in Rocky Point, Clarendon.
1
2

As the Met Service warns Jamaicans to brace for more flood rains today into tomorrow, residents in some sections of the island have already seen more than their fair share.

Among the flood victims was Shirley Brooks, who spent much of yesterday doing all she could to rescue the remaining 30 chickens she had, after 40 were swept away during the rain which started last Friday night.

Brooks, a resident of Portland Cottage, Clarendon, told our news team that while she is desperately hoping that the rain will stop soon, she is trying to remain calm.

"What to do? Mi did have fi tek dem (chickens) and dispose of them because I can't keep them. I had some plyboard so that's what I had to use, get some blocks and use some grass on it so that the ones that leave can dry," said Brooks.

"That's my livelihood so it rough but there are good times and bad times," added Brooks with a shake of her head.

Seventy-four-year-old Etta Henry of Rocky Point has had to find other areas in her one-bedroom house to rest her coal stove, as the cooking area was flooded.

"Mi flood out bad. If you look in my kitchen, nowhere not in there to cook likkle food so tings bad. Is me alone live but mi grateful for mi neighbours who try to assist me," the elderly woman told The Sunday Gleaner.

"From morning mi up just a try to mek sure that mi likkle room nuh get too much water. If you look outside though, a pure water," added Henry.

Paul Henry and his family in Corner Piece, also in Clarendon, also spoke of the severe impact the inclement weather had on them when our news team visited their home.

According to Paul, he could not go to sleep last Friday as he had to stay up to watch the flood rains while sweeping tons of water from his veranda.

"Anytime it rain like this, we go through some really tough times. Mi just stand up here so wid mi family and a watch what is going on," said Paul.

Member of Parliament for South East Clarendon Rudyard Spencer, who was seen touring the area yesterday, said he would be doing all he could to address the situation.

'We have seen tremendous outpouring of water which has flooded everywhere. Even the centre that we are trying to fix up has been flooded.

"No amount of drainage could have stopped this. The system is just overwhelming and so we have to look back again, what is it that can be done," said Spencer.

"Rocky Point and to a lesser extent Mitchell Town are the worst affected. No lives have been lost but there has been damage. All in all, we are watching proceedings and we will be making representation," added Spencer, as he pointed to areas which were significantly affected by floodwaters days ago.