No guarantees that deadly outbreak will not recur! 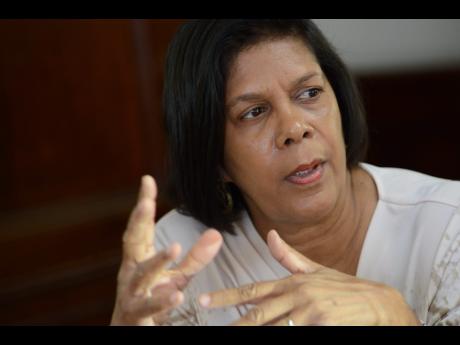 Rudolph Brown
Dr Alison Nicholson, consultant medical microbiologist at the University Hospital of the West Indies, makes a point during an Editors’ Forum at The Gleaner, North Street, on Tuesday, June 13.

The University Hospital of the West Indies (UHWI) has taken steps to prevent the outbreak of infectious diseases such as klebsiella and serratia which killed several preterm babies, but there are no absolute guarantees that recurrences will not take more lives.

Reports of the outbreak led to islandwide panic and calls for the resignation of then health minister Dr Fenton Ferguson. The new health minister, Dr Christopher Tufton, would also face a backlash from a similar bacterial infection outbreak early in his tenure.

Head of the Microbiology and Infection Control Unit at the UHWI, consultant medical microbiologist Dr Alison Nicholson, said it was impossible to give guarantees that such outbreaks would not occur from time to time, but the hospital was taking all steps to keep them at minimum.

Speaking at a Gleaner Editors' Forum. last week, she said as part of the new thrust of the hospital, it is hoped that improved diagnostic services would minimise infection-control problems.

"We can't ever tell you that we will not have another outbreak. It's not possible. We can't guarantee that because germs are everywhere and you have transmission of infections very easily. Perhaps the most common way is by hands," Nicholson said in response to questions posed by reporters.

According to her, there are good and bad microbes - disease-causing micro-organisms.

"You can't eradicate microbes, believe it or not. Although they cause diseases they are also good for something. They have their roles and so you can't eradicate them. So what you do in a health care setting is to identify the problem organism and put in place all that you need to keep these to a minimum. And even when you think you have kept them to a minimum, they will appear," she explained.

Among the diseases that did not announce themselves were those that led to the crippling infections which resulted in thousands of Jamaicans afflicted with the chikungunya (chik-V) in 2010-2011 and the Zika virus, which led to thousands more affected in 2016-2017.