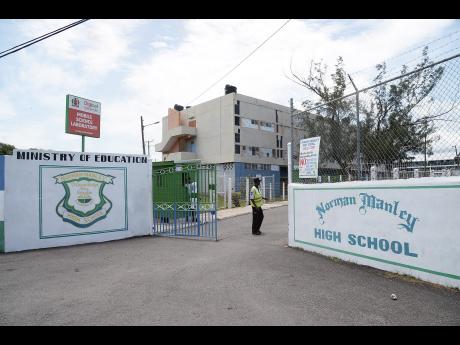 The Ministry of Education has launched an investigation into the stabbing of a Norman Manley High School student yesterday, resulting in the victim being hospitalised with a punctured lung.

The student was stabbed six times by a schoolmate just before morning devotions. The ministry has responded by tasking safety and security director, Assistant Superintendent Coleridge Minto, with the investigation.

School principal Adaire Powell-Brown, meanwhile, told The Gleaner that the incident runs the risk of erasing gains made by the inner-city school, which has seen several programmes being initiated to help steer students away from violence.

"It's not for the lack of trying. We have done everything humanly possible through countless programmes, and even with prayer to have our children less prone to violence, yet here we are," she said.

Powell-Brown was speaking of yesterday's incident in which a grade nine student was stabbed six times in the back about 7:30.

The student who was attacked was immediately rushed to hospital after receiving emergency medical care by the school's nurse.

SHOULD NOT HAVE BEEN AT SCHOOL

"It happened just as we were gathering for morning devotions. This grade 11 student, who should not have been at school, approached and stabbed the young man in the back," the principal stated.

She said the incident appears to be a carryover of a previous altercation between the students.

The attacker is said to be in police custody, after fleeing the scene.

"Dispute resolutions and our very own Rebirth Programme have made vast improvement in our students. We have also invited the Victim Support Unit to come talk with the students at various times and all these have helped," said Powell-Brown.

In addition, she said, students who have been suspended have been enlisted in a special mentorship programme designed to bring them in line with the school's core principles.

Dean of Discipline Tyrone White argues that it was an unfortunate incident, but that it reflects the concern of the school.

"We are not short of such programmes here, but as soon as some of them leave school, they go back into the communities where violence seems to be the answer to every disagreement," he said.