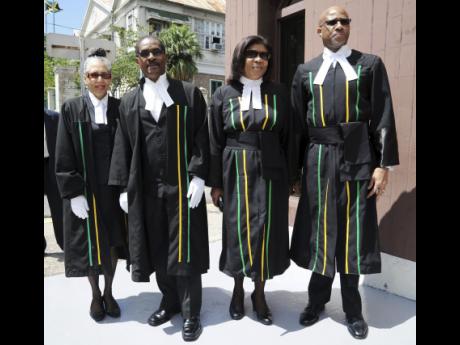 Norman Grindley
In this 2013 photo, High Court judges arrived at Gordon House for the State opening of Parliament. They are (from left) Justice Hilary Phillips; Justice Seymour Panton, president of the Court of Appeal; Chief Justice Zaila McCalla; and Justice Evan Brown.

Judges who threatened an unprecedented legal fight with the Andrew Holness administration over outstanding salaries are expected to get their money by month end.

The chief justice and the president of the Court of Appeal lead the way with their individual basic salaries set to grow to $10 million annually plus millions more in perks.

Yesterday, Everald Warmington, acting leader of the House of Representatives, tabled the Judiciary (Salaries) Order, 2017 signed on June 12 by Finance Minister Audley Shaw. That order considered the recommendations made by the Independent Commission for the Judiciary, which reviews judges' salaries.

Justice Minister Delroy Chuck told The Gleaner after that notwithstanding the order being referred to the House Regulations Committee, the approval from Shaw and subsequent tabling in Parliament means the judges can get their money at the next payday.

"So," Chuck added, "the chief justice's salary should be somewhere in the region of $16 million. In addition, all the judges are afforded a new car every five years with total upkeep. That is valued anywhere between $2 million and $3 million per year."

Judges last received an increase in 2014 and the commission's report tabled in Parliament on April 18 recommended total increases of almost $200 million for them. Those increases cover 2015, 2016 and 2017.