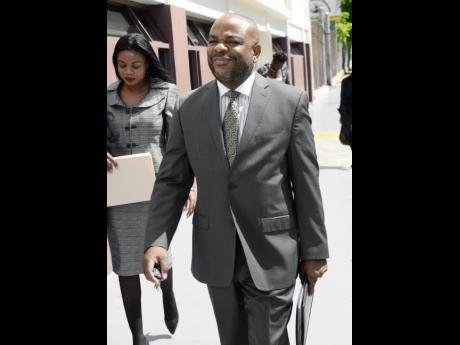 With a chorus of complaints still ringing within the ranks of the police force regarding the powers accorded to the Independent Commission of Investigations (INDECOM) to compel cops to give statements and to answer questions, the head of the oversight body has said the issue is settled and it's time to move on.

Commissioner of INDECOM, Terrence Williams, said seven years after the oversight body was established, a barrage of complaints keep coming from police personnel and their lawyers about the commission being able to compel cops to give statements.

Addressing members of the Internal and External Affairs Committee of Parliament yesterday, Williams said the Constitutional Court ruled four years ago that it was not unconstitutional for INDECOM to require the police to give statements and answer questions in relation to an incident.

He noted that the oversight body has not received a complaint from members of the Jamaica Defence Force or correctional officers.

Williams explained that the law protects the police from self-incrimination, noting that INDECOM cannot ask a law enforcer a self-incriminatory question, nor can it compel him to answer one.

"The difference is, however, we can ask him a question which incriminates his colleague, and he is required to answer that question."

'How can you compel us to give statements?' is the constant criticism and the constant claim of unfairness of INDECOM for the last seven years," Williams said of members of the police force.

The INDECOM boss said the leadership of the force should make a strong case to its membership that "you have made this complaint about being compelled to give statements. The court has ruled, time to move on now, on that issue."

He reminded the police that it has always been the 'standing orders of the JCF' that the officers involved in an incident should quickly settle in writing their account of what took place.

Williams claimed that for years, some police personnel did not follow those old internal rules and in some instances did not even produce a statement.

'You must give that statement promptly!'

Terrence Williams contended that the police force had experienced a paradigm shift "where they are moving from not giving statements early, or not giving at all, to INDECOM saying 'you must give that statement promptly' and they are saying 'it is unfair.'"

Police Commissioner George Quallo said it was almost impossible, in some instances, to collect a statement from the police after an incident.

"I have seen many instances where persons, having just been involved in a gunfight, they don't even know themselves, so to speak, some of them are distraught."

"I remember down by West Street some time ago, when the men returned from a particular incident, I say members crying uncontrollably because of what they engaged in."