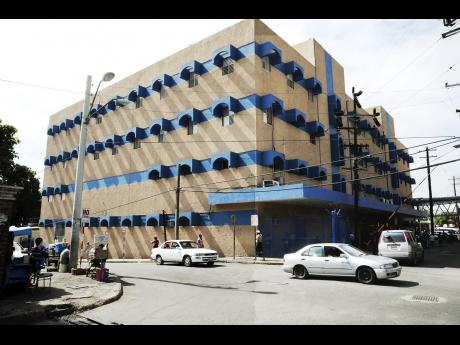 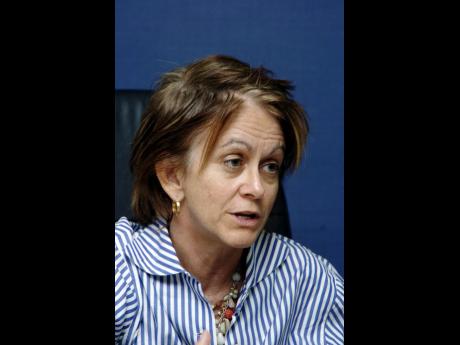 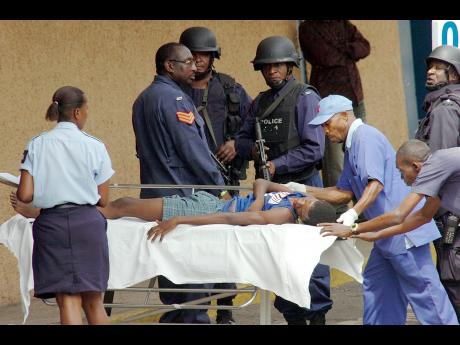 File
Porters take a young man who had sustained gunshot wounds to the shoulder to the Accident and Emergency Department at Kingston Public Hospital in May 2010.
1
2
3

Crime and violence have not only posed a serious threat to the security of Jamaicans, with an average of 28 murders per week and 672 killings up to June 17 this year, but taxpayers are paying a high price for gun conflicts. The Kingston Public Hospital (KPH) alone is spending an estimated $400,000 a day to treat victims of gunshot wounds.

In a presentation that left members of a select committee of Parliament stunned, Dr Ann Jackson-Gibson, an anaesthetist at the KPH, revealed yesterday that it has cost the country almost $80 million to treat victims of gun violence at the KPH since the start of the year.

At the same time, Dr Elizabeth Ward who, along with Jackson-Gibson, made a joint submission to the special select committee of Parliament examining the Law Reform Zones of Special Operations legislation, said that in 2014, it cost taxpayers $3.68 billion to provide direct medical care to victims of violence at 22 hospitals across Jamaica.

Ward said that the cost of social-intervention programmes in communities dubbed hotspots, which could significantly reduce the burden on hospitals, was $1.3 billion. "Where are we spending our money?" she asked.

Ward said that when effective community interventions were being funded in the past, non-governmental organisations were able to reduce by 50 per cent the number of gunshot wounds seen at the KPH.

The Zones of Special Operations bill sets out social-intervention measures to rebuild crime-plagued communities. This would take effect after the prime minister declares an area a zone for special operations, which would allow the security forces to search places, vehicles, or persons within specific locations without a warrant.

Jackson-Gibson pointed out that between January and June 20 this year, 28 persons who received gunshot wounds were admitted to the Intensive Care Unit (ICU) of the KPH. Of the 28 persons, four died after being treated for between 20 and 25 days in the ICU.

She told the committee that based on available data, the average gunshot victim stays in the ICU for seven days.

Dr Ann Jackson-Gibson painted a stark picture of patients who have been waiting to have elective surgery but have had to give way to emergencies occasioned by violent incidents.

"When you extrapolate that to the number of admissions, you are talking about almost 200 ICU admission days. When medical care such as room and board, salaries, ventilators, among other pieces of equipment, is itemised, it is looking more like $400,000 per day," Jackson-Gibson said.

"When you multiply that, you are talking about the hospital spending and taking resources out of the system to the tune of $80 million from the start of the year," the medical practitioner noted, adding that this was just KPH alone, with the medical costs incurred as a result of gunshot wounds at other hospitals not taken into account.

She bemoaned that "our money is going into a sinking fund, and the people who really need it - the cancer ... patient who comes in with cancer of the womb is telling me she has to go to chemotherapy without removing the womb because the resources are spent on emergencies."

"This is the reality, and this is what we have to deal with on a daily basis," she said.

Jackson-Gibson also highlighted that in 2016, there were 724 victims of gun violence who were treated in accident and emergency. Another 207 persons were dead on arrival at KPH owing to gunshot wounds.

The number for stabbing incidents was also glaring, with 335 victims of stab wounds, while another 21 were pronounced dead on arrival at the hospital.

The 2016 data for KPH excluded information for the month of July.

Jackson-Gibson said that 1,059 persons were admitted for treatment at the hospital in 2016 for both gunshot and stab wounds.

"So you had 1,059 persons that are occupying beds on the wards that we need to put elective cases in, and a lot of these people go into the operating theatre.

"And this is something that we have to do at all the public hospitals across the island because Cornwall Regional and all of them are completely inundated from the impact of this ongoing burden."