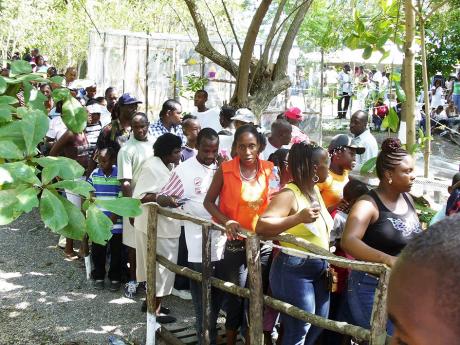 File
The crowds are drawn to the Denbigh Agricultural, Industrial and Food Show each year, but come August 1, the shutters could still be down if public health breaches are not addressed. 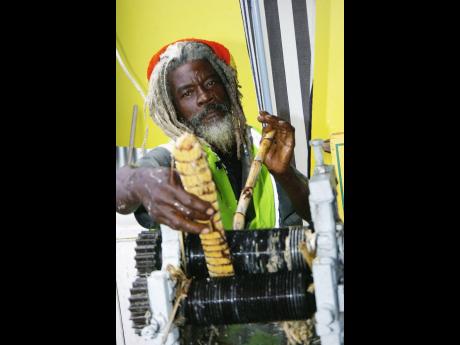 File
In this file photo, Godfrey Mills operates his cane mill at the Denbigh Agricultural, Industrial and Food Show in Clarendon. However, like everyone else looking forward to this annual family event, he may not get to do so this year because of public health safety issues.
1
2

This year's staging of the annual Denbigh Agricultural, Industrial and Food Show hangs in the balance pending the outcome of a meeting this morning between a team from the Clarendon Health Department and the organisers, the Jamaica Agriculture Society (JAS), over public health safety breaches at the showground.

"I'm confirming that we are in receipt of a letter expressing concern. I recognise the concerns to be significant, and the nature of the concerns would fall smack in the lap of a Ministry of Health in any country, and so we are not treating it lightly," Dr Winston De La Haye, chief medical officer, told The Gleaner on Wednesday.

Asked what could be the worst-case scenario, De La Haye was resolute. "We close it down," he said. "Unless something changes dramatically, we'll have no choice but to close it down. That's just the harsh reality as it stands. Based on the report I have, I would have no difficulty," he declared.

The letter, dated Monday, June 12, from Dr Michael Coombs, regional technical director of the Southern Regional Health Authority (SERHA), accused the JAS of failing to comply with "legislative requirements of the Ministry of Health, amidst repeated attempts to obtain such compliance".

"For this event to be endorsed by the Clarendon Health Department [or the] Southern Regional Health Authority, the JAS must be in compliance with the relevant public-health regulations," Coombs wrote.

"This is an event that attracts mass gatherings and visitors from overseas. As such, the environment for disease transmission and other untoward events is heightened. The region continues to seek resolution through amicable means rather than enforcement. As such, I am seeking the input of your office in engaging the Ministry of Agriculture in resolving this matter prior to the commencement of the August 2017 show," the SERHA regional technical director appealed to the chief medical officer.

It is a situation that has got the Ministry of Health's full attention.

"Given the severity of the thing, what he has written is solid. There is no two ways about it," De La Haye told The Gleaner.

However, JAS president Norman Grant yesterday played down the public-health concerns, saying that preparation of the ground was far advanced and on track, with all of six weeks before the August 5-7 staging of the 65th annual show.

"There is no threat that is hanging over the JAS or the event itself. No, there are no public health safety breaches, so there is no threat to close down the show," he told The Gleaner, pointing to this morning's meeting as no more than a formality.

"What is going to happen tomorrow (today) is just another progress walk through the report to see what the original findings are and where we are with closing those out," he explained.

"The public health department, they are part of the show committee, and what we have engaged in is a level of partnership that will lead to an excellent delivery of the show. So we are working in partnership with them and the areas that are highlighted for corrective measures to be implemented. Resources will be identified to implement those corrective measures, but there is no threat that is hanging over the JAS or the event itself," he said.

Below are the critical public-health breaches contained in the letter to the Ministry of Health that could force the cancellation of the Denbigh Agricultural, Industrial and Food Show this year.

- At the previous shows, several locations were found with active mosquito breeding - many of which remains (sic). Results from analysis confirmed the presence of Anopheles, Aedes, and Culex mosquitoes.

- Food preparation was conducted in areas entirely open to or inadequately enclosed from contaminants.

- No provision was made for handwashing and waste water from food operations which flowed on to the compound, resulting in water stagnation and fly infestations.

- For the August 2016 show, 42 per cent of food handlers were without valid food handler's permits.

- Most toilet facilities were non-functional throughout the shows.

- Solid waste was disposed of indiscriminately in sections of the venue.