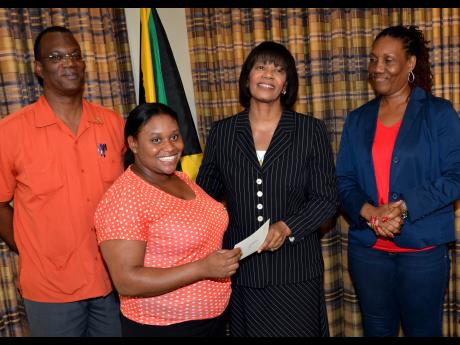 File
In this 2013 photo, outgoing Member of Parliament Portia Simpson Miller (second right), flanked by the two councillors bidding to replace her in South West St Andrew, Karl Blake of the Greenwich Town division (left) and Audrey Smith-Facey of the Payne Land division (right), as they presented Louisha Donaldson (second left) with a scholarship letter.

Audrey Smith-Facey has been around politics for nearly half a century and the People's National Party (PNP) has been her vessel of choice for all that time.

She was the first elected councillor for the Payne Land division in St Andrew South West in 1998, and in her sixth term she is now trying to go one better as she bids to replace outgoing Member of Parliament Portia Simpson Miller in the constituency.

PNP general secretary Julian Robinson has confirmed that Smith-Facey and another councillor in the constituency, Karl Blake, were the only two nominees when the nomination period closed at midday last Friday.

Blake is still recovering after being shot at his political office nearly one month ago, and while the party is yet to set the date for the run-off between the two, party insiders say he will start as second favourite in the two-horse race.

Smith-Facey, mother of three and grandmother of four, told The Sunday Gleaner that introduction to politics came when she was a young child.

No stranger to politics

"I have been around politics for the last 48 years and since I was a child. I was working in the South West St Andrew since I was 10 years old, working alongside my parents.

"As a child, I cried so that my parents wouldn't leave me, and from I was three years old my parents had me out there at street meetings. So I am no stranger to politics. So my life is politics," said Smith-Facey.

According to Smith-Facey, she first met Simpson Miller in 1974 and has worked with her through the years, watching the woman she describes as her mentor and a "political giant" become councillor, member of parliament, PNP vice-president.

"I am proud to be seeking to represent a women who is strong, has charisma, and who is a champion of the people. I admire her greatly and I have learnt so much from her.

"I have seen how she treats her constituents, especially the elderly and the young ones. And I have been everywhere with her. Who didn't grow me, me and their children grow," said Smith-Facey.

"I don't want to be another Portia for the constituency. There can only be one Portia. So I just want to be Audrey for South West St Andrew."

Born in the neighbouring South St Andrew constituency, Smith-Facey lived her formative years in South West St Andrew after her parents moved there when she was three years old.

As a daughter of the constituency, Facey-Smith said she is determined to ensure that the contest to replace Simpson Miller does not become ugly.

"I have said to the people to support me, I don't want to be a part of anything that is unsavoury or that will be disrespectful to the legacy of Portia. I don't know why anyone would have dropped out.

"I handed in my letter on Friday, June 16, because I have some team members who were very clear that they wanted me to go forward," said Smith-Facey, as she declared that there is no animosity between herself and Blake, who is her cousin.

Smith-Facey said she was by Blake's bedside when he was shot in an attack which left his office assistant dead.

Now that she has set her sights on replacing Simpson Miller, Smith-Facey said she wants no part of anything that will bring embarrassment to the PNP and will be part of no mischief-making in the constituency.

"I have been told over the years that I have a lot of her characteristics. The people who have been pushing me tell me that those are the things that endear me to them. How I treat my senior citizens, the children, they talk a lot about that.

"For me, South West is my family. Not just my division, the constituency on a whole, I see them as family. And I am sure that she (Portia) will be there to guide my path as much as she can," said Smith-Facey.

Being around Simpson Miller for a long time has given the veteran councillor a front-row seat on the achievements of the former PNP president, but Smith-Facey is aware that there is unfinished business in the constituency as she moves with an outstretched hand to take the baton.