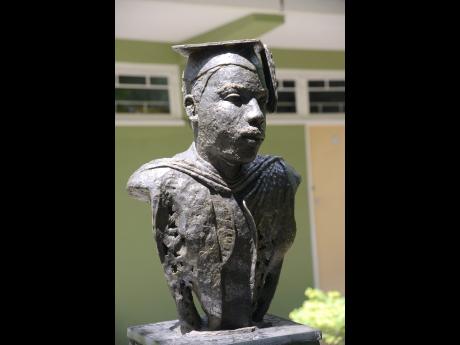 Norman Grindley
The bust of Marcus Garvey at the University of the West Indies, Mona campus. 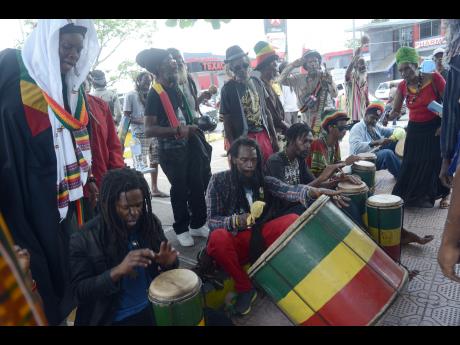 Norman Grindley
Rastafarians chanting at Papine, St Andrew, yesterday in protest against the bust of Marcus Garvey that was erected at the University of the West Indies, Mona campus.
1
2

The controversial bust of National Hero Marcus Garvey at the University of the West Indies, Mona campus, was heavily guarded by security personnel yesterday as protesters unhappy with the look of the sculpture took to nearby Papine to make public their displeasure.

One security guard, who requested anonymity, told The Gleaner that the increase in security was intended to safeguard against any eventuality, given the anger displayed by some of the protesters.

In Papine, protesters chanted and waved placards denouncing the sculpture.

Mayayaa Nature held a placard that read: "Shame on you UWI! Remove the fraud from our hero, the Hon Marcus Garvey. You dunce!

She told The Gleaner: "Marcus Garvey is not just a hero for Jamaica, but for the whole world, and I think for the university to do something like this, it's not nice. It is not educated. It is an injustice to us and our future generations. They put a statue up there and it doesn't even resemble Marcus Garvey. When something like this is being done, likkle from now we can't even tell our great-grandchildren who Marcus Garvey is.

"(The bust) takes away his African nose, his beautiful African lips, and him nice African face, and they give him a straight face and a straight nose. We are protesting against that because we are very vexed. This is like trying to re-educate our future."

Yasus Afari described the bust as a misrepresentation and declared it unacceptable.

"We ought to arrive at national decisions based on consultations. The University of the West Indies should be working in harmony with the legitimate aspirations of the people in education, in social, cultural, political and religious areas. If this man represents so much for us as a people who a go through so much struggle and who have been through so much great tribulation and still going through such great tribulation, why dispossess the man of attributes that epitomise what he represents?" he said.