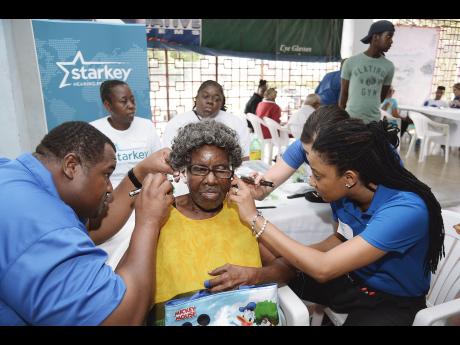 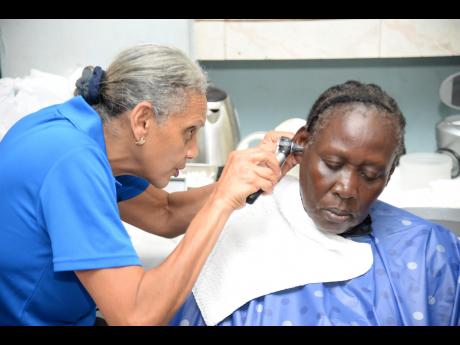 Come December, more than 1,500 hearing aids are to be provided free of cost to persons afflicted with hearing difficulties, this as the Starkey Hearing Foundation (SHF) executed phase one of three in its mission to bring the gift of hearing to Jamaicans who can't afford it.

Founded in 1984, SHF has serviced more than 100 countries around the globe and, in 2010, made a commitment to provide one million hearing aids this decade.

"Prior to getting the hearing aid, we have to get their ear impression and send it back to the lab in Minnesota. A custom mould is then created for that patient and we return with the moulds and hearing aids in December to fit them in. That will constitute phase two," Tamiann Young, SHF regional coordinator for the Caribbean, told The Gleaner on Thursday at the Chinese Benevolent Association (CBA), Old Hope Road. More than 800 patients were tended to there, over three days.

Jamaica Association for the Deaf, the National Council for Senior Citizens, and the Jamaica Council for Persons with Disabilities are primary partners who aided with identifying persons most in need. specifically within the South East Regional Health Authority region.

Tamiann Young, Starkey Hearing Foundation (SHF) regional coordinator for the Caribbean, has said the organisation's free hearing aids are not a one-off donation and, as such, the organisation is moving to ensure patients are provided with proper aftercare service.

In May, members of the SHF team conducted training sessions with nurses, health workers from the Ministry of Health, and volunteers from the Jamaica Association for the Deaf to support the patient population .

"Important to the programme's sustainability is the ability to administer aftercare (phase three). We've only trained persons within Kingston, St Andrew, St Catherine and St Thomas, so ideally, we don't want to have [patients] outside of that. However, a few did turn up and were attended to as our founder's philosophy is to not turn anyone away. This initiative is not a one-off kind of thing. We're bringing an awareness and true sense of hearing health care to the country and the region," said Young.

Each patient is given a unique, lifelong ID card, which enables them to visit local aftercare clinics to receive a lifelong supply of batteries or to adjust the ear mould in the event that it becomes uncomfortable or should it break. If that happens, it is taken from the patient, fixed and returned.

The process begins with registration upon arrival. Thereafter, ear screening is undertaken to determine if the ears are cleared to get the impressions. If not, patients move on to otoscopy, where the ear is cleaned. They then do a wide frequency audibility test, designed by SHF to ascertain if certain sounds are being heard based upon frequency.

Patients are then transferred to the education station and updated re the sequence of processes to happen throughout the day. It's then over to the ear impressions portion of the setup, and finally, quality control stations to ensure that written forms are accurate and the patient has received the right information as to how to keep in contact and the date of return.

In speaking with The Gleaner, Kirk Richards, international development director for the Caribbean, underscored the importance of local partnerships to programme sustainability.

"Come December, it's a whole different ball game. We provide the aids and the batteries, but the SHF team only comes and goes, so the team on the ground that will administer the aftercare is critical.

"Digicel Foundation has been a key partner as we continue to expand the programme locally. The Ministry of Health, JPS Foundation, CBA, Lions Club have also contributed greatly to this three-day success through provision of volunteers and other aids."