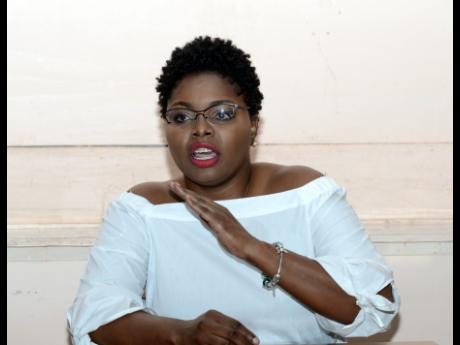 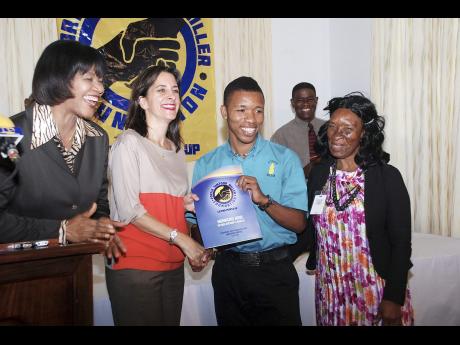 File
Rajesh Hutchinson (third left), a recipient of one of the scholarships given out annually by the Portia Simpson Miller Foundation, accepts his award from chairman of the Foundation, Zein Issa Nakash (second left), while Simpson Miller (left) and Hutchinson's mother Denise Palmer look on.
1
2

Escaping generational poverty is an achievement that Dr Tamara Foster is understandably proud of, and she has no doubt that her former member of parliament, Portia Simpson Miller, is a big part of her success.

Growing up in the gritty community of 33 Lane off Waltham Park Road in South West St Andrew, the young Tamara seemed destined to follow in the footsteps of so many in her family, out of school while still a teenager, pregnant before the age of 20.

That was the fate of her grandmother and her mother, pregnant while still in their teens. But the young Tamara was not prepared to walk that road as she was determined to become a doctor. Fortunately, she found a saviour in Simpson Miller.

"I became the first person in my family to complete a secondary education much less to attend university," Foster told a Gleaner Editors' Forum last Wednesday.

"I sat in my yard in a lane right up there, 33 Lane, one a di baddest place inna Kingston 13, and I came home with a note from the University of the West Indies saying that I was not supposed to attend any more classes. I was deregistered 'cause I had no money," Foster recounted vividly.

With all seemingly lost, Tamara turned to her family members, but that was a lost cause as they had no money to help finance her education.

But an optimistic aunt was adamant that if Portia found out about her plight, she would revive the dream. With determination, the aunt got the word of Tamara's plight to Simpson Miller.

"A week later, they called me to say that they would fund my tuition for the entire duration of medical school. When I went to the ceremony, there were many secondary and tertiary students and persons who dropped out because of pregnancy and wanted to go back to school," said Foster.

"What she did meant a lot to me as my grandmother had my mother when she was 16, and my mother dropped out of high school and had me when she was 17, but I got to go to UWI at 18," added Foster.

Only way out of poverty

Convinced that education is the only way for Jamaicans out of poverty, Foster lauds the former MP for her efforts.

"There is no other way out, you get a five grand ($5,000) and you buy little food and drink and then you go hustle again tomorrow. That is not it. Portia impressed upon us the value of education," said Foster.

According to the surgeon, based at a Kingston Public Hospital, there were many struggles while she was in medical school, but she kept going because she could not disappoint her MP.

"At times I felt like I couldn't go on, I couldn't even afford food. I had to rush home from classes to get something to eat. I remember that one man even refused to help me just because I was from Portia's constituency, and at that moment I knew I couldn't let her down."

According to Foster, like Simpson Miller, she has endured classism, with people using her ghetto roots to belittle her.

"I have experienced and learnt that no matter how far you go, no matter how educated you are, no matter how better you are, living a rich man's life, you are always going to be classified as a person who doesn't deserve there because you come from the ghetto."

She said advice from Simpson Miller helped her to face those who would want to make it appear that she was less than she is.

Foster said Simpson Miller words, "People will try to tear you down because I have been torn down so many times, but just continue to work hard, continue to fight," provide encouragement to her at all times.

Women of Distinction | Former Prime Minister, Gilmour among great Jamaican women to be honoured
Simpson Miller lashes out at crime situation - Former PM calls on leaders to speak up
Praises for Portia - Professionals from former PM's constituency say 'superstar' MP was key to their success
End of an Era | Leaving from the left - Simpson Miller joins Seaga as former PMs to resign while on the opposition benches
End of an Era | A tale of two Portias Pt. 2