Talk to Trump! - Moreno urges Jamaica to increase lobbying in the wake of recent changes in US policy 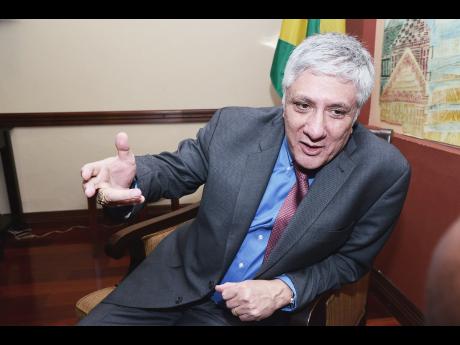 Moreno, who is retiring from the US Foreign Service, left the island last Friday, having served as America's ambassador to Jamaica for just over two years.

Having underscored his tour of duty with the visit of former US President Barack Obama to the island, Moreno left

concerned over the significance which the US will give to Jamaica and the region, given some policy shifts since Donald Trump was elected president.

The policy shifts include the rifts over the financial services industry, the withdrawal from the Paris climate accord, and a proposed 28 per cent reduction in the US State Department's budget, which could force it to slash programmes like the Caribbean Basin Security Initiative.

"Yes, I believe that those are all valid concerns," Moreno told The Sunday Gleaner in his first interview as a private citizen after handing over control of the US Embassy in Kingston to chargÈ d'affaires ad interim, Eric Khant.

"If I was staying as ambassador and not a private citizen, I would be lobbying Washington with reports, analyses; on my hands and knees begging, because there are some big issues here," Moreno told The Sunday Gleaner.

He argued that the US has to continue helping Jamaica to tackle the crime situation, and urged local policymakers not to relent in their opposition to the proposed taxing of remittances.

"We still have to pay attention to the crime situation and the violence situation. And you guys are going to have to keep pressing forward about remittances," said Moreno.

"Jamaica has a very valuable asset in Washington, and that's Ambassador Marks, and an embassy in Washington to make these points. So, hopefully, a combination of our actions here will help keep Washington on board," added Moreno.