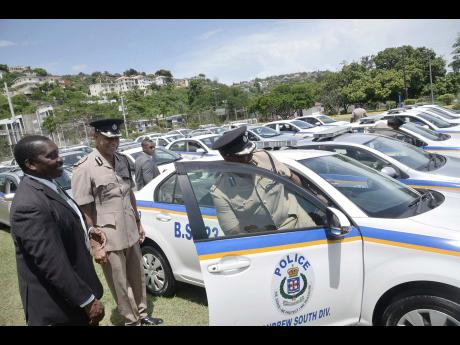 Intelligence reaching National Security Minister, Robert Montague, has indicated that the price of illegal ammunition being sold on the local market has increased because of the recent procurement of two Coast Guard ships.

Speaking at a press conference yesterday at the Office of the Police Commissioner in St Andrew, which was for the handover of 30 used vehicles to the Jamaica Constabulary Force, Montague went further to state that a decrease in the number of spent shells found on crime scenes nowadays was a good indicator that the ships are being put to work.

"It is early days yet, but we have seen the increase in the price of bullets. You normally would see 80 to 100 spent shells on a crime scene in some of the very hot spots, but we are seeing a reduction. Intelligence has shown us that the price of bullets on our streets is trending up, and we are attributing it to the work of the two vessels that we bought.

"Their presence is coupled with other assets of the marine police. The monitoring of our coastline and the dominating of our marine space has given a lot of the smugglers time to think about their actions, so that they make less trips and less guns come in through our borders. If the supply is down, the price is going to go up," the minister said.

He stressed that a surveillance plane, which has been bought but is yet to arrive, will put an even greater dent in the operations of criminals bringing illegal guns and other contraband into the island.

"The ships are playing a massive role. They operate on the outer perimeter of Jamaica's waters and the marine police are inshore, doing close-to-shore operations. When we get the plane, we will be able to multiply and be more effective because the plane will be able to see vessels coming from miles out and then smaller vessels can be deployed to attack them specifically," Montague highlighted.

"Right now, our ships are just patrolling, which means that criminals at sea using smaller vessels can wait until the ship is gone 20 miles down, then they sneak through. With the plane, we will have better coverage and dominance of our marine space. The ships are also helping to preserve our fishing resources. We are having less and less of our brothers and sisters from Central and South America removing our resources from the sea."