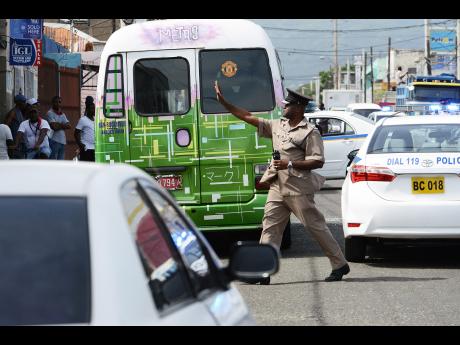 Ricardo Makyn
A police officer directing traffic at a crime scene where a bus driver was shot by gunmen at the intersection of Studio One Boulevard and Slipe Road, St Andrew, yesterday. He was rushed to the Kingston Public Hospital.
File 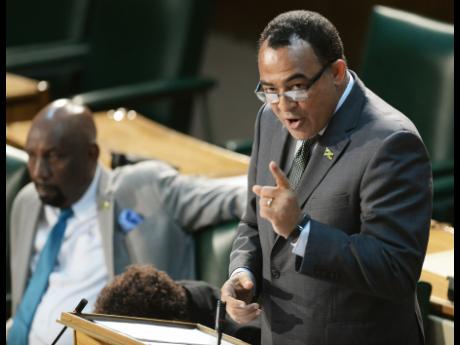 A flare-up of violence over the past few days across sections of the capital city has plunged the Kingston Public Hospital (KPH) into crisis, forcing management to take emergency-like measures in order to manage a surge in demand for critical-care services.

The west Kingston-based facility has been inundated with cases of male trauma patients requiring immediate attention, but the top-tier officials at the hospital say that the facility is out of space and dangerously low on resources to handle the crisis.

Over the past 36 hours, the hospital has had to grapple with at least 18 patients suffering from gunshot wounds, a figure six times the daily average.

Senior medical officer (SMO) at the KPH Dr Natalie Whylie disclosed yesterday that all the male surgical wards at the hospitals are now overcrowded.

She said that the trauma patients are streaming in from communities that have had incidents of violence in recent days, emphasising that the profile of the majority of the patients was young males.

Not only exceeding its bed capacity, the hospital has also had to put more staff on front-line duty and suspend elective surgery to help cope with the pressures as it struggles with the lack of adequate resources.

In addition, the KPH's chief executive officer, Errol Green, said that arrangements were being made to have some patients transferred to the University Hospital of the West Indies, while some would be referred to the nearby Victoria Jubilee Hospital.

Green said that the hospital would be faced with increased operating costs, pointing out specifically that the $400,000 it costs per day to care for a single patient is likely to increase.

Health Minister Dr Christopher Tufton, who yesterday witnessed first-hand the issues gripping the hospital, said that what is unfolding is a major concern.

"What we are dealing with right now is an unfortunate circumstance of self-inflicted trauma on ourselves, on our person, and on each other, resulting in a health-care system that is placed under significant stress in an attempt to try to save lives," an alarmed Tufton said.

He said that he has requested that management present him with a shopping list even as short-term measures are being implemented to assuage the crisis.

In the meantime, the staff at the hospital openly expressed their frustration at the unfolding situation.

"Every God Almighty day, if a nuh six, 10 gunshot victims, none nuh come," said a porter walking by the KPH's accident and emergency area shortly after a bus arrived with a man suffering from gunshot wounds.

One nurse said that the situation at the hospital was untenable as doctors and nurses were doing 18-hour shifts in an attempt to keep up with the demand for urgent medical care.