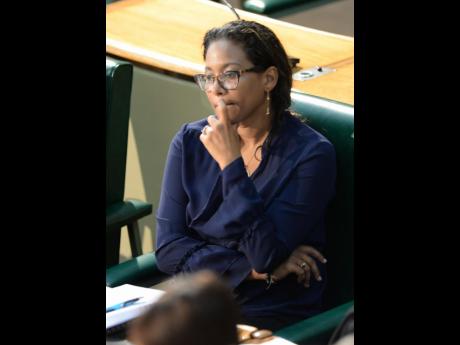 A Government senator has come to the defence of embattled Finance and the Public Service Minister Audley Shaw, suggesting that he was the victim of "reckless business practices", which has caused him to rack up a whopping telephone bill of more than $8 million in one year.

Dr Saphire Longmore is arguing that customers of telecommunications providers are vulnerable because the companies do not enquire about suspicious activities taking place on the accounts of their clients.

"If it were a credit card or a loan, such would be followed up," she said in a Facebook post.

Earlier this week, Shaw said that he was oblivious to the fact that roaming charges were being applied to his account while he was overseas on government business.

The finance minister said he had paid $2.5 million from his pocket and secured a discount of a little over $1 million from the cell phone service provider to help cover the alarming cost that led to a public uproar. According to a Television Jamaica report, based on data obtained through the Access to Information Act, from February 2016 to March this year, Shaw incurred $8.34 million in phone bills.

On Tuesday, Prime Minister Andrew Holness, who described the exorbitant bill as unacceptable, ordered that an audit be done on the bills of government ministers and state ministers, and said that charges to the accounts are to be capped at an amount to be determined by the Ministry of Finance and the Public Service. He also urged Cabinet ministers to take responsibility to clear their cell phone bills.

Longmore hailed Holness for his "rapid response" in addressing the matter, agreeing that it was necessary to place a limit, especially because the public purse was footing the bill.

"If even the minister of finance can fall victim, imagine you and me!" the senator reasoned.

In 2014, then Junior Foreign Affairs Minister Arnaldo Brown came under fire for the more than $1 million in telephone charges he racked up within a year - for the period

July 2013 to June 2014 - on his government-issued mobile phone. He blamed it on the high cost of roaming for voice and data services.

In May this year, Trinidad and Tobago Minister of Tourism Shamfa Cudjoe came under fire for chalking up TT$59,000 (J$1.12 million) in telephone bills.

Cudjoe explained to Parliament that roaming charges, accrued on an overseas trip to The Bahamas, was the reason for the alarming bill.