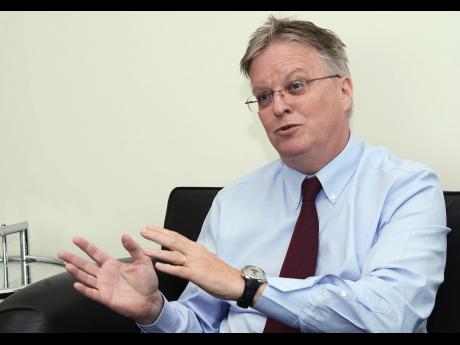 Outgoing British High Commissioner to Jamaica David Fitton says Commonwealth countries such as Jamaica should position themselves to hold pivotal trade talks with the United Kingdom at the Commonwealth Heads of Government meeting slated for April 2018 in London.

He told The Gleaner yesterday - a week before his tour of duty ends in Jamaica - that the British government is preparing for long negotiations with other European countries following its decision to leave the European Union - an action that gave rise to the term 'Brexit'.

Fitton said that once those tough negotiations are concluded with the rest of the European Union, the UK government would then look for international trade deals with its other partners, including Commonwealth states.

"We understand perfectly that there is sensitivity in terms of the EU [talks]. We can't start our other negotiations yet, but it does not stop us from talking to our friends, particularly Commonwealth friends," he reasoned.

However, he said that at the conference in April next year, the UK government would have the chance to talk concretely with prime ministers from Commonwealth states about "what we want to achieve in the future".

He praised Jamaica's efforts at keeping the communication lines open with Britain in relation to post-Brexit developments and how it might impact developing countries.

"I would be hesitant to offer advice - I don't think Jamaica needs it - but keep talking just as you are doing already. Our doors are open. We want to continue and strengthen that relationship and that trading relation with our friends," Fitton stated.

While there is a lot of uncertainty post-Brexit, the UK high  commissioner indicated that there might be some opportunities arising for countries like Jamaica.

On June 23, 2016, UK nationals voted in a referendum to leave the European Union and, as such, official Brexit talks got under way on June 19 this year between Britain and its European partners to forge new trade relationships and other arrangements.