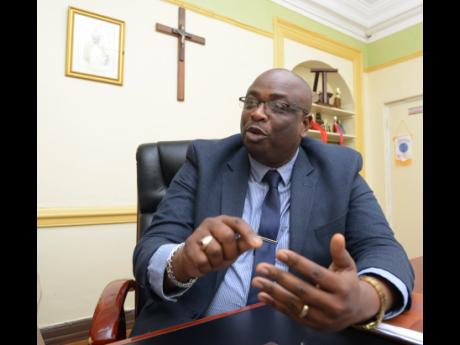 Garth Anderson, the president-elect of the Jamaica Teachers' Association (JTA), says that there is no provision in the Ministry of Education's Code of Regulations to prevent a teacher, who is a licensed firearm holder, from taking his weapon to school.

Anderson, the principal of Church Teachers' College in Mandeville, was responding to questions from The Gleaner that were posed against the background of a recent incident in which a teacher allegedly pulled his licensed firearm after being confronted by hostile students at a Trelawny high school.

"When a person is issued with a firearm licence, he is told that the firearm must be on his person or locked away in safe keeping at home," said Anderson. "The school is like any other workplace, where there is need for protection of life and property."

He continued: "The code we now use was written in 1980. The school environment today is much different from those days. Sometimes it gets hostile, making protection of life and property necessary. Based on what is happening in schools today, teachers might well be feeling the need to protect life and property."

Anderson said that the issue of teachers taking their licensed firearms to school would definitely be an agenda item at the JTA's Annual Conference in August, especially against the background of a recent bulletin on firearms in schools, which was unveiled by the Ministry of Education.

The bulletin, over the signature of chief education officer Grace McLean, stated in part that "firearms are to be concealed at all times and should not be exposed or in the visibility of the student body at large. Firearms should not be used to intimidate students or any member of staff. Firearms are not to be used by teachers to quell any form of disturbance involving students or any member of staff."

According to Anderson: "We have to ensure that the rights of teachers to protect themselves within their constitutional rights are protected. Our organisation has to be cognisant that we are, as it were, the teachers' lawyers when and if they are accused of wrongdoing. At the conference, the bulletin issued by the Ministry of Education will receive full attention so that at the end, teachers will know exactly how to operate within the system."

Interestingly, during the graduation ceremony at the Hague Primary and Infant School, where Anderson was attending as the guest speaker, a parent showed up with an entourage to fight a teacher who had reprimanded her child. Thankfully, the matter was settled without violence.