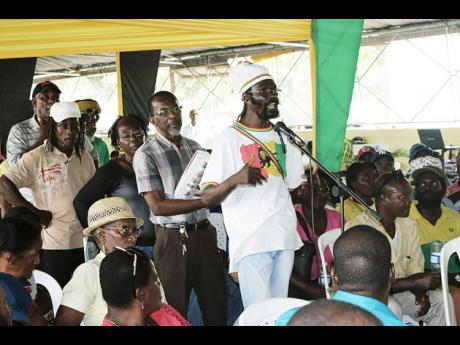 Christopher Serju
Farmer Alvin Powell (front) voices his discontent with the poor treatment of small farmers as other farmers wait their turn to address Karl Samuda, minister of industry, commerce, agriculture and fisheries. The occasion was the 122nd annual general meeting of the Jamaica Agricultural Society at the Denbigh Showground in Clarendon on Wednesday.

Farmers put Jamaica Agricultural Society (JAS) President Norman Grant in the hot seat as they demanded answers on several issues at the 122nd annual general meeting, held on Wednesday at the Denbigh Showground in Clarendon.

One farmer wanted to know about the much-touted construction of the hotel on the property as he recalled last year's meeting, where it was highlighted.

Grant gave the assurance that the hotel was definitely in the pipeline but pointed out that it was a slow process.

Several farmers also expressed displeasure at the lowered prices of coffee. One farmer said that his prices fell from $12,000 a bag to $10,000. He was referring to Minister of Agriculture Karl Samuda's words of confidence last year assuring them to "have no fear".

In his address last year, Samuda stated: "I heard somebody say coffee price is going down, but I can tell you this, everybody who has a square of land in the Blue Mountain area, it is going to take you three years, but plant coffee. Coffee has the greatest future in Jamaica because there is no limit to what the Japanese will buy. There is no limit, and the price is going sky high."

Grant told the farmers that coffee was a delicate issue. He told them that the previous year, the prices skyrocketed but admitted that they were now falling.

Not accepting that explanation, one agitated farmer declared: "Japan is one small part of the world. We talking 'bout a global world with global economy 'cause remember seh dung inna Asia, man nuh mus drink coffee. Wha happen to places like Britain and Europe and America, whe wi woulda even get pounds fi coffee? What's going on, Norman? Why unno bruck down di coffee industry?"

He went on: "The people dem want it (money), so you supposed to have di market wid money. You a tell mi bout China and Japan. Mi nuh hear you a tell mi bout Belgium, Germany, and all dem place deh. A computer time now. You can stay here so and get you market same place. We nah tek dat!"

Grant could only respond: "OK. All right, Michael."

Back on the table for the farmers was the late delivery of the minutes, something they have been complaining about every year at the annual general meeting.

Their contention is that they do not have enough time to peruse the minutes to properly comment on them.