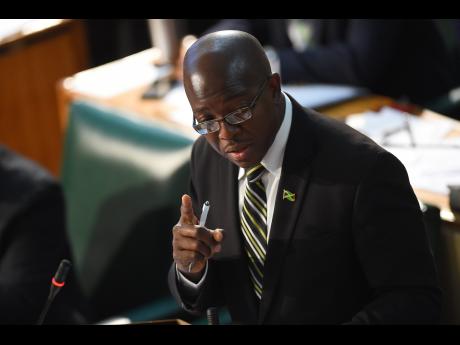 The Government plans to spend $23 million to implement a three-month programme, starting on August 2, under which motorists with $2.8 billion in outstanding traffic tickets can pay fines without penalties.

State Minister in the National Security Ministry Pearnel Charles Jr announced the expenditure yesterday as he opened the Senate's debate on a traffic ticket amnesty bill that was approved on Tuesday in the House of Representatives.

Charles Jr said that the money being spent is to cover the training of personnel to deal with queries from motorists, a public-education campaign, meetings with stakeholders, and employment of cashiers and security for Tax Administration offices.

The amnesty, which will run from August 2 to October 31, is for tickets issued between September 1, 2010, and July 31 this year.

Up to December 31, 2016, traffic tickets yet to be cleared amounted to approximately $2.8 billion.

Charles Jr said that the Government would use whatever is collected to, among other things, modernise the court system, buy vehicles for the police, pay judges, and cut the backlog of court cases.

The Opposition, led by Mark Golding, protested the tabling and debating of the bill in the same day, noting that it violated the Senate's rules.

The Government was in no mood to make amendments, and where it agreed that some suggestions had merit, it committed to having further discussion.

Golding questioned the intention to use the monies to pay judges, arguing that salaries were a matter of budgeting, which could not be dependent on things like an amnesty and the uncertainty of amounts that would be collected.

He also wanted consideration for persons with outstanding tickets before 2010.

However, he said that he hoped that the Government would collect as much money as it could.

A 2012 amnesty was affected by inefficiencies in implementation and lack of awareness issues.

The Government says that the proposed amnesty will be better and is an opportunity for motorists to get a clean slate before the implementation of new road traffic legislation that has been languishing before the House of Representatives.

Charles Jr said that the bill would be enacted by the end of the amnesty.