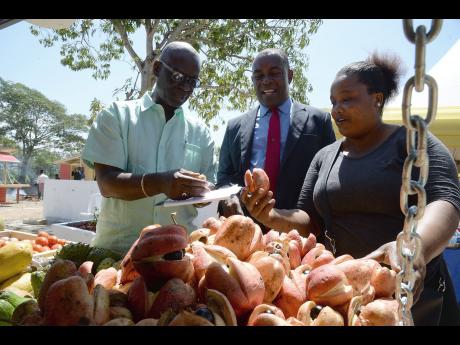 Jermaine Barnaby
Sandra Evans (right), a vendor at Ackee Bird Green Grocery, in discussion with Desmond Mckenzie (left), minister of local government and community development; and Mayor of Portmore Leon Thomas about ackees and other food items at the stall during a tour of the facility yesterday. 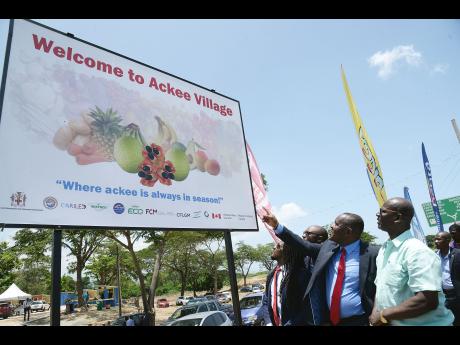 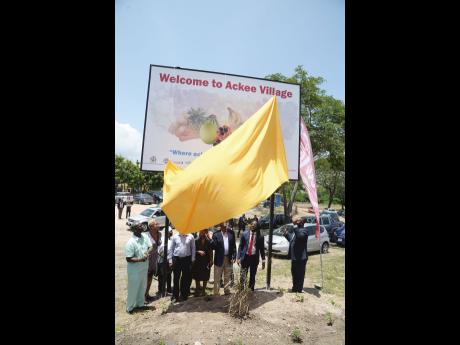 Jermaine Barnaby
The cloth is removed, unveiling the sign that announces the Ackee Village.
1
2
3

The newly constructed Ackee Village, located off the Dyke Road in Portmore, St Catherine, has the potential to become a major tourist draw, says Mayor Leon Thomas, echoing similar sentiments from the St Catherine East Central Member of Parliament Alando Terrelonge. It could also replace the once popular Faith's Pen in St Ann as a rest stop for weary travellers, they say.

The mayor was speaking at yesterday's official launch of the village as a unique vending site.

"I am very proud of the moment. It was a long journey. But this project has the potential to replace, in some ways, what we had in Faith's Pen as a one-stop, rest stop for food and recreation, and could, in time, become a place that attracts tourists to the city of Portmore," said Thomas.

Ackee Village, so called because of the year-round presence of the fruit, was in its original state, bush land near the Dyke Road, a spot where vendors made use of the busy thoroughfare coming into the Sunshine City at the exit off Mandela Highway.

Now, it's a well laid-out vending park with modern amenities, including a spacious parking lot and a children's play area to boot.

The project, according to Thomas, was first introduced to the vendors in 2009, but it failed to get off the ground due to several things that conspired against it.

Approximately $11 million dollars from the Ministry of Local Government was spent on the project, with a further US$80,000 provided through funding by the Caribbean Local Economic Development in conjunction with the Portmore Municipality.

"This is truly a collaborative effort, and we here in Portmore are delighted that we have brought this to fruition," Thomas told The Gleaner.

"We are in discussion with some companies to have Phase Two started, and in the exciting Phase Three, there will be a riverside park and restaurants," said the mayor.

Local Government Minister Desmond McKenzie has described the development of Portmore's newest vending site, Ackee Village, as a great show of cooperation between local government and the private sector.

The village, which occupies approximately 26 acres, was officially opened for business yesterday.

"Today is a watershed day because it also speaks to the overall involvement between the municipal councils and the private sector," McKenzie said.

"The commitment from the ministry is to ensure the completion of this project because I think this is a great project for Portmore and for the Portmore Municipal Corporation."

He indicated that the project has the capacity to generate income, adding that it was unfortunate that it could not be replicated across the country because "not many municipalities have the luxury of the amount of lands that is available here (Portmore)".

President of the Ackee Village Vendors Association, Samantha Biggs, spoke highly of the new vending park. She said that in addition, everything would be done to keep the facility in tip-top shape, including the proper disposal of garbage.

"This means a lot to us, and we certainly appreciate it. Working with the Portmore Municipality on this project was important for us," said Biggs.

"We as vendors will ensure to keep our kiosks clean, plus we are in partnership with the Wisynco Group, where the garbage will be properly removed and disposed of in a timely manner," she said.