Free up buggery! - Leader breaks ranks with many Christian colleagues 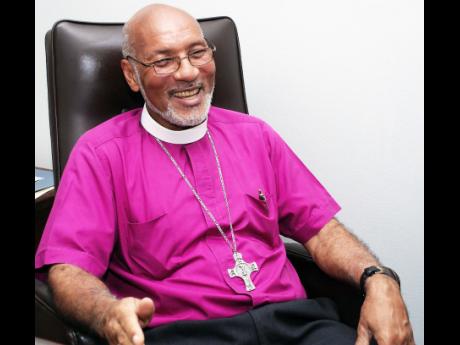 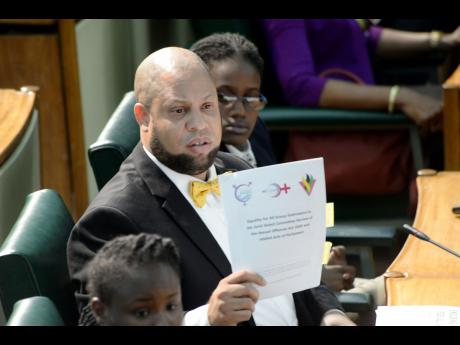 Jermaine Barnaby
Dane Lewis, director of Equality for All, J-FLAG, making his presentation on the reviewing of the Sexual Offences Act in Parliament recently.
1
2

Head of the Anglican Church in Jamaica and the Cayman Islands, Bishop Howard Gregory, has broken ranks with many of his Christian brethren and urged the parliamentary committee examining the Sexual Offences Act and related laws to recommend the removal of the offence of buggery from the law books, widen the definition of rape, and recognise marital rape.

In a written submission to the committee in which he emphasised that his views were personal, Gregory placed his position in line with executed German Christian leader Dietrich Bonhoeffer, who had argued that the aim of the Church is not "that the authorities make Christian policies, Christian laws and so on, but that they be proper authorities in the sense of their special commission".

According to Gregory, the State should not waste time with a referendum on the buggery law but should just strike it from the books.

Gregory said Christians should be cautioned against believing in the view that they must be the gatekeepers of the law against buggery in order to prevent the legalisation of same-sex marriage.

"This submission does not accept the cause and effect relationship which is being introduced into this matter, neither is it advocating homosexual marriages," he said.

Gregory argued that while the anus is not a sexual organ, it has been part of sexual activity between men and women.

But Gregory argued: "Sexual activity engaged in public spaces is illegal and should continue to be so, whether of an heterosexual or homosexual nature.

"Beyond that," Gregory added, "what happens in privacy between consenting adults should be beyond the purview of the Government."

He said to establish that the offence took place under the current laws would require the people being exhibitionists or persons or agents of the State "peeping" into the privacy of consenting adults, "which the Government should not become entangled with".

Prime Minister Andrew Holness, before his party won the 2016 general election, promised that the removal of the buggery law would be put to Jamaicans in a referendum. Since the victory, Holness has said while the referendum will take place, it is not a priority for his Government.

Delroy Chuck, who chairs the parliamentary committee, said at a function earlier this year that CARICOM's parliaments should simply stare down the church lobby and strike down the law. But he soon after reverted to the referendum position after facing criticisms.

"The promise of a referendum on the issue is at best a way in which those responsible for governance are postponing the issue in order to avoid taking controversial decisions," he argued.

Most Jamaicans have historically been against homosexuality. A Gleaner-Bill Johnson poll in 2014 found that 91 per cent of Jamaicans believe lawmakers should make no attempt to repeal the controversial buggery law.

Six church groups and the Jamaica Coalition for a Healthy Society gave their submissions to Parliament, urging the lawmakers to retain the buggery law for the health of the nation and upholding Christian principles.

In a separate appearance, the president of the Marcus Garvey Research Institute, Baba Heru Ishakamusa Menelik, called for tougher penalties, saying homosexuality is not a "normal way of life" and could quicken the spread of sexually transmitted diseases.

Turning to the thorny issue of marital rape, Gregory argued that there can be rape in marriage, a view that also breaks ranks with the position of church groups, including the fast-rising Jamaica Union of Seventh-day Adventists.

"Non-consensual sex accompanied by threat, intimidation and violence ought to be characterised as rape," he said.

Jamaica's law allows for marital rape in cases where there was physical separation of the man and the woman.

But Gregory said in the context of an abusive relationship, "even without reaching the point of physical separation or abuse", rape can occur.

Gregory further argued that Jamaica would do well to move away from the preoccupation with whether it is an anus or vagina, male or female when it comes to rape.

"Central to the definition of rape is the notion of the sexual activity being non-consensual. When then would the law make a distinction between the experiences of a Jamaican male student ... and the female student who may have been raped under similar circumstances," said Gregory, as he pointed to a male student who was allegedly raped by a teacher.

The parliamentary committee completed oral submissions last Tuesday, with its report expected to be completed by November and submitted to the House of Representatives for debate.