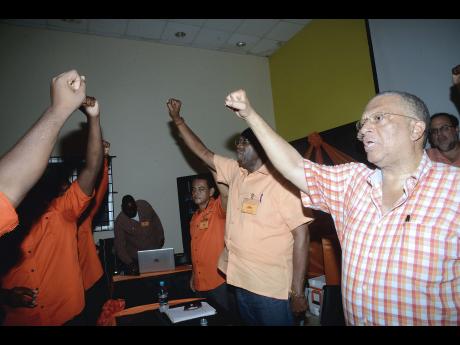 People's National Party (PNP) President Dr Peter Phillips is appealing to supporters to ensure that the selection process to decide the party's candidate for St Andrew South West is peaceful and fair.

The PNP's National Executive Council (NEC) unanimously passed a resolution on the weekend mandating that a special conference be held next Sunday to name a successor to Portia Simpson Miller, the outgoing member of parliament for the constituency.

Phillips, who was addressing delegates on the final day of the two-day NEC meeting, held at the Mona campus of the University of the West Indies, urged supporters to ensure that the process does not divide the party.

"We need to ensure that all of us use our influence to ensure a selection process that is free and fair and peaceful and which allows for all the Comrades to be able, after the selection, to come together as Comrades of the People's National Party and work together," Phillips said.

"We need to remember that an essential resource in the political process is the unity of the People's National Party."

PNP General Secretary Julian Robinson also revealed that the NEC has agreed to establish a protocol to guide how party members "deal with social media and other media".

"The [PNP] secretariat has been asked to develop that in conjunction with some of the other organs within the party," Robinson explained.

Phillips said the proposed protocol is essential because Jamaicans are depending on members of the PNP to "conduct ourselves well".

"We can't allow people who have tunnel vision or who will allow their personal interests to dominate the long-term interest of the Jamaican people, which is to have an effective and vibrant People's National Party," he said.