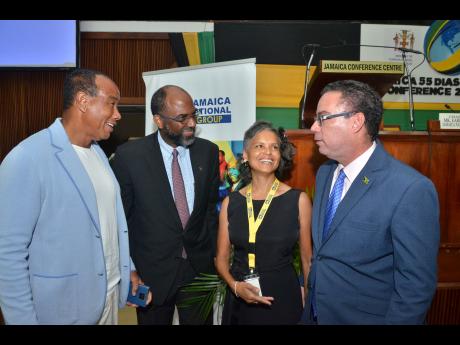 "Persons come to Jamaica, take Jamaica and leave with it, but my goal is to come and commit to Jamaica, employing persons, and to come again and again," Rowell told the Jamaica Information Service at the Jamaica 55 Diaspora Conference in downtown Kingston today.

The Emmy-nominated actress and film-maker, said she sees great potential in Jamaica.

"We have the resources here; my hair and make-up team was from Jamaica, my line producer is from here, you have all the equipment here, you have editing, sound, costuming and even directors," she noted.

Rowell said the value of the work that she experienced here in Jamaica was superb and matched up with California and Hollywood.

Approximately 25 per cent or about two dozen members of the cast and crew of the show are Jamaicans living here.

Rowell, who is best known for her role in the ‘Young and the Restless’, was born in the United States of America to a Jamaican father and identifies as a part of the Jamaican Diaspora.

Filming for the second season will start on August 31.

Rowell, who executive produces and directs the series, said the goal is to return to Jamaica to shoot part of the second season.

The film-maker is seeking investment from local investors in her Days Ferry production company.