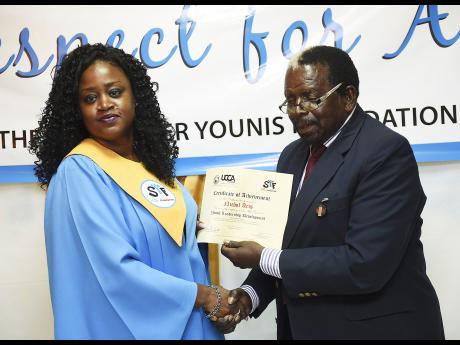 Gladstone Taylor
Valedictorian Nichol Aris receives her certificate from guest speaker Pearnel Charles, speaker of the House of Representatives, at the graduation ceremony of the 63rd cohort of the Jamaica Chamber of Commerce-Sameer Younis Foundation last Friday.

Though Nichol Aris has known the volatility of Norman Gardens in eastern Kingston for more than three decades, it is a training programme of a few weeks that has left a lasting imprint on her character.

The 33-year-old is the valedictorian of the 63rd cohort of the Jamaica Chamber of Commerce (JCC)-Sameer Younis Foundation Youth Leadership Training Programme, undertaken in June and July.

Conceived by former JCC president Sameer Younis in the early 1990s, the initiative seeks to empower residents of inner-city communities in various life improvement areas via a classroom setting.

And while lessons of entrepreneurship, interpersonal relations, family life and community leadership were well-received by Aris, it is the topic of conflict resolution that has rejuvenated the psychiatry hopeful.

"Personally, I've never been in any conflict, but it affects you just the same or maybe worst, to witness it so often, for so long.

"September morning when children are heading to school or during Christmas time, it doesn't matter, there's always some feud in the area or neighbouring communities," Aris told The Gleaner at the graduation ceremony held at the JCC offices in downtown Kingston last Friday afternoon.

Equipped with newly acquired knowledge, Nichol Aris, a trained nurse, voiced optimism about inspiring her community, youngsters, in particular, to tread a path of progress over pain.

"Just as I was encouraged by a friend to join, I'm pushing for youth in my community to be a part of this life-changing programme. A lot of them just need something positive to occupy their time. I've encouraged persons to finish their schooling and they've taken my advice and came back to thank me. Because at the end of the day, they're not going to respect you if you're doing the same negative as everyone else. But they take advice from those they observe doing something different or positive," said Aris.

She added: "Socialisation is a great thing. Most of them war over where they live because they don't know anywhere else. So, coming out of it and seeing new places and meeting new people will go a far way in helping to mature their outlook."

Aris argued that the only drawback to the programme was the short space of time, but stated in the same breath that she has already seen improvements in her own life, as well as that of her new-found friends.

"I've sent out resumes for years now and it's since coming here and adjusting my resume that I've been on an interview. I also had a bit of an anger problem, and I'm calmer these days. A programme like this does wonders and should be expanded."