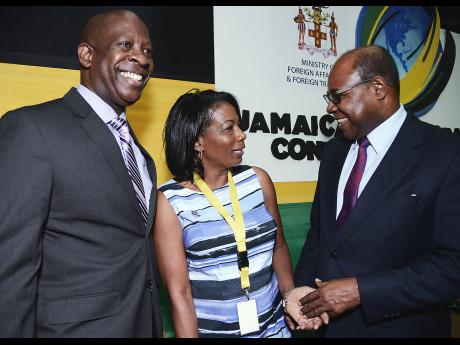 The only imminent plan pertaining to the Government owning and operating a national airline is that it is never likely to happen, at least, not the way it once was, says Nicola Madden-Greig, chairperson of the Gastronomy Network and Linkages Council.

She was responding to a question from Jacqueline Watson, president of the Caribbean American Chamber of Commerce of Georgia, who quizzed the presenters at yesterday's penultimate day of the Jamaica 55 Diaspora Conference on the possibility of once again being able to fly on a nationally owned airline.

"Are there any talks of reviving Air Jamaica?" she asked. "It was a symbol of our nationhood, of our industry and link to the world," she continued, to cheers of approval from those in attendance.

"Air Jamaica was one of the country's best forms of branding because it came with class and dignity. When you mention Air Jamaica, it always stirs pride in the people in the diaspora," Watson said.

She said that every modern nation builds its own identity, noting that one sure way of doing so was by flying a national airline.

Watson told The Gleaner that it was incumbent on all Jamaicans to urge the Government to pursue partnerships to bring Air Jamaica back to life.

Madden-Greig, who was a part of a panel that also included Tourism Minister Edmund Bartlett, then noted in her response that indications suggest that calls for Air Jamaica were ill-advised.

"I understand everything you are saying and we all feel the passion for Air Jamaica, but I don't think you are going to see it return any time soon. Let me remind you, I am not in the Government, but for what I know, that's the general view," she said.

... New approaches could be pursued

Nicola Madden-Greig says that while it may not be feasible for the Government to own and operate an airline, given past experiences, she is confident that new approaches can be pursued, including public-private partnership arrangements in the airline sector.

"I think what you may see, because of how the airline industry is going, you will see private-sector involvement and partnerships. There is the partnership between Jamaica and a Guyanese with Fly Jamaica at the moment, but I don't know if, in its original form, you will see a nationally owned airline like Air Jamaica, funded by the Government," Madden-Greig stated.

Watson, however, believes the diaspora would likely put money where their mouths are if they were to be afforded the opportunity of investing in a Jamaican-owned airline.

Approximately US$2.2 billion in remittances flow into Jamaica each year, earning more than US$188 million in revenues, which contributes 16 per cent of GDP.

"I am not just speaking for myself. I am speaking for many others who have asked me about it. We need to bring our airline back. People in the diaspora are yearning, I am yearning for a national airline, and we are committed to supporting it. Clearly, the money can be found," she stated.

"Just to say we can never do it, (we) can't ever own an airline, doesn't fly with me at all. I believe there can be possibilities. There can be a partnership between the Government and the people (diaspora) or some private entity. It's something the leaders should consider."