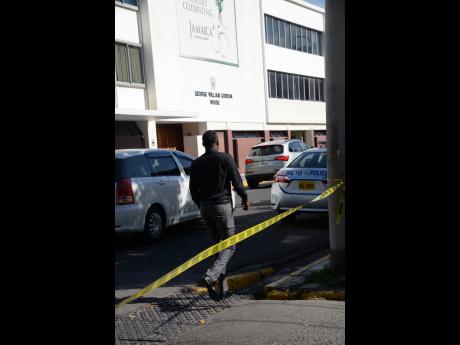 Jermaine Barnaby
The police yellow tape at the scene of a shooting on Beeston Street, literally on the steps of Gordon House, the nation’s parliament building.

The impunity with which criminals carry out their unlawful acts appears to have been on full display yesterday a few metres across from Gordon House - the seat of Jamaica's legislature - where a gunman reportedly shot and injured a man at the corner of Duke and Beeston streets then made good his escape along the busy morning thoroughfare along Duke Street.

Reports are that the injured man has been treated and remains in hospital.

According to the police, a man was standing near the corner of Beeston and Duke streets in downtown Kingston when a gunman approached and opened fire, hitting him before escaping on foot.

stration and Appropriations Committee yesterday morning, said that the incident, which occurred in the vicinity of "the highest court of the land", showed a blatant disrespect for public institutions and a disregard for the law.

Removing his parliamentary hat, Phillips said: "As a Jamaican, I am afraid, not only for myself, but for my children and other persons."

"We saw a shooting in afternoon traffic on Ruthven Road of a businessman. If that can happen there, (if) it can happen right in front of our Parliament, then what would stop it from happening at King's House or Jamaica House or even at our schools while in session?" Phillips questioned.

The incident referred to by Phillips was the murder of Corporate Area businessman Richard Ramdial earlier this month, which police surmise may have been a contract killing.