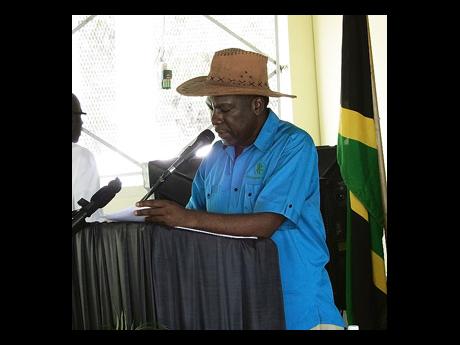 Patrons attending the annual Denbigh Agricultural, Industrial and Food Show from August 5-7 can expect a bigger, better show following significant improvements to the facilities at the Denbigh Showground in Clarendon. President of the Jamaica Agricultural Society (JAS) Norman Grant gave that assurance yesterday, following written approval from the Clarendon Health Department (CHD) that health and other critical concerns had been addressed to its satisfaction.

"Denbigh 65 is ready," Grant told the press conference at the JAS head office at 67 Church Street, downtown Kingston, adding that while the improvements had cost the JAS an additional $15 million, it was money well spent. "It gave us an opportunity within a very short time to do a number of things that would have been deferred if the issues were not brought to the fore."

In a memo to Dr Kimberly Scarlett-Campbell, medical officer of health for Clarendon, Chief Public Health Inspector Linnees Green-Baker gives an update on the response of the JAS, to concerns raised by the department, as follows:

"Reference is made to the aforementioned levels of compliance and the implementation of the critical recommendations, as outlined in the Denbigh Show (2016) Post Event Report, dated April 20, 2017. On this premise, the team of technical officers (public health inspectors) from the CHD is satisfied that the JAS, to date, has done enough to address the major risk factors and has satisfied minimum acceptable standards for the staging of this temporary event. Though consideration is being given to the historical reality of critically installed items/fixtures gone missing from the showgrounds, follow-through inspections and other actions will be maintained until all the deliverables are put forward by the JAS."

One of the outstanding deliverables is the installation of at least one fire hydrant, to be installed on the showgrounds, about which the JAS is reportedly in consultation with the fire department. For the show, high-risk exhibitors, such as those in the food court, will be required to provide fire extinguishers at each location, as part of their contractual agreement.

On other issues, such as that which speaks to sanitation and accessibility of toilet facilities at the venue, the show organisers seem to have done enough to impress the health department.

"The pits/septic tanks linked to the operable toilet blocks were emptied and renovation work done to render all fixtures functional and easily cleaned. Clogged sections of the existing sewerage [piping] were identified and effectively repaired. The toilet blocks associated with the previously clogged segments of the sewerage system were test-run on Wednesday, July 12, 2017, by means of utilisation by the attendees of the JAS annual general meeting. No active nuisance was observed in this regard. Logistics for placement of complimentary portable toilets were worked out and placement will be done nearing the proposed show dates," the memo notes, acknowledging the impact of this remedial action.

"Previous nuisances abated; control systems in place to proactively mitigate against any anticipated risk related to sewage disposal on show days," it adds.