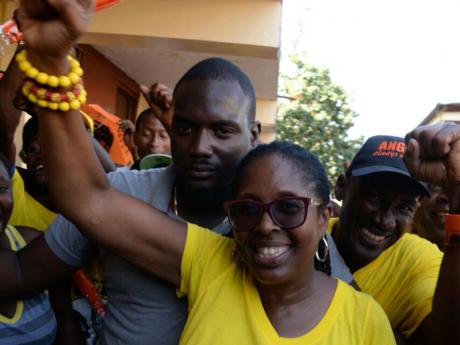 She polled 595 votes to defeat Audrey Smith Facey who got 502  in today's selection conference.

The vote was called by the party's executive after controversy erupted over the replacement process.

There were eight spoilt ballots.

Some 1,894 delegates were eligible to vote.

Simpson Miller endorsed Senator Brown Burke earlier this month, weeks after she reigned as Member of Parliament on June 29.

Brown Burke will soon be expected to resign from Parliament's Upper House.

Brown Burke is the councillor for the Norman Gardens Division which falls in the Kingston Eastern and Port Royal constituency.

She has said she thought Simpson Miller was 'grooming' her to take over.

The polls opened on time at 10 o'clock and closed at the scheduled 4 p.m cut off time.

The selection exercise was generally smooth disturbed briefly by concerns about voter's without identification or those with errors in the spelling of their names as well as verbal clashes between the supporters.

There's a view that the representative who is likely to win the upcoming by-election will be crucial to the camps in the PNP focusing on who will replace president Dr Peter Phillips when he demits office.