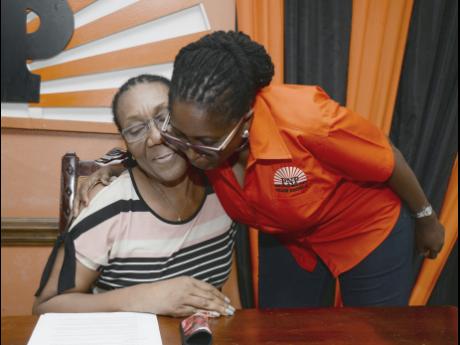 It has been billed as a standard selection exercise where People's National Party (PNP) delegates indicate to the party's executive who they want to represent them in the next election, but from all indications it is more, much more.

On the surface, Audrey Smith Facey and Angela Brown Burke are slated to square off today for the right to represent the PNP in the looming by-election in the St Andrew South Western constituency, which was represented for years by former Prime Minister Portia Simpson Miller.

But indications are that forces in the party see the constituency as a major prize for those positioning themselves for top posts after sitting president Dr Peter Phillips leaves the stage.

At 68 years old, Phillips is not expected to have a long stay in the president's chair, and those who want to replace him, whenever that time comes, understand that St Andrew South Western, one of the safest PNP seats in the island, offers a large block of delegates whose votes could help to determine the next leader of the party.

That prize has led to the usual fractiousness that marks many internal elections in the two major parties, and despite the hugs and kisses at a press conference at the PNP's headquarters last Wednesday, and the signing of a Code of Conduct, indications are that daggers are drawn.

There have been whispers of threats and voter intimidation with political banter and rivalry being reduced to disrespectful name-calling between supporters of the two candidates.

Several senior members of the party, including Simpson Miller, have taken sides and the social media battle has been intense.

To compound the matter are claims that several persons in the leadership of the party are siding with Brown Burke as her election, along with the expected stroll to victory by Mark Golding whenever a by-election is called in St Andrew South, would open two places in the Senate for Phillips to name his people to fill.

Since taking the reins of the PNP in April, Phillips has not disturbed the party's council of spokespersons which was named by Simpson Miller, and indicated to the senators named by her that he would not ask them to resign.

Party insiders have said Phillips has delayed naming his council of spokespersons, despite repeated promises that it would be done shortly, because he is awaiting the expected by-elections.

Should Smith Facey win, it is expected that she will take her place in Parliament on the backbenches, which many senior Comrades argue is no place for the holder of this safe seat.

But if Brown Burke, a PNP vice-president, emerges victorious, she is likely to be named to the team of spokespersons, and her supporters claim that the former mayor of Kingston has the "political pedigree" to take command of this "safe seat".

Last week, both contenders sought to downplay their differences even as the political heat increased on the road.

"We are not enemies. We are just going up for member of parliament for South West St Andrew. There have been individuals who want to give the impression that we are at war. There is no war in my heart. There is only room for love and, at the end of the day, I live and abide by the voice of the people," declared Brown Burke.

"We still love her, but just can't give her the votes this time around," said Smith Facey, who is being backed by several outspoken young Comrades who have been pushing for a renewal of the party.

Today's election will be conducted at the Caribbean Palm's Community Centre in the heart of the constituency, with 1.927 delegates eligible to vote.

Each candidate will be allowed observers at every stage of the process - from the initial screening to the counting of the ballots.