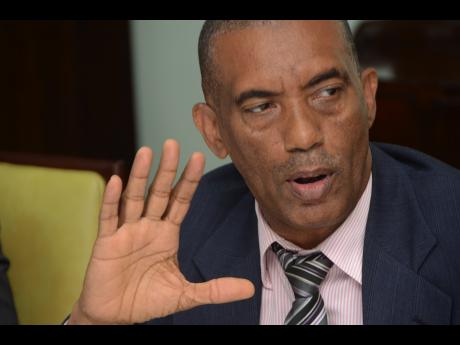 The Reverend Garnett Roper, president of the Jamaica Theological Seminary, has found himself in trouble over his decision to declare his support for the decriminalisation of buggery.

Roper's position has not found favour with the Jamaica Evangelical Alliance (JEA), which has hinted that he could be asked to leave the group.

"We reserve the right to ask somebody to remove themselves from the organisation by virtue of the fact that what they have articulated publicly is not in the interest of advancing the cause of the association, so it will form part of the discussion that we will be having with the board," Bishop Alvin Bailey, president of the JEA, told The Sunday Gleaner.

"It is certainly not good for the movement at this point in time for direct association because as one of the main proponents of the evangelical doctrine he cannot be embracing buggery," he added.

Roper has however noted that his stance on decriminalising the act ought not be interpreted as an "embrace" of buggery.

"The evangelical churches are partners to a lawsuit in the court to retain the buggery law so we cannot be paying lawyers to say the buggery law must stay and one of our main proponents, who is shoulder to shoulder with us, is separate from what we are saying," added Bailey.

He said while Roper does not have direct allegiance to the JEA, the outspoken church leader has obligations based on being president of an entity which is owned by the Missionary Church - a member of the JEA.

"He is the head of the Jamaica Theological Seminary, so therefore, he would naturally have been one of the main proponents of the evangelical doctrine," said Bailey.

"So when he took the position that he took (on the repeal of the buggery law) every evangelical church would question what he is about."

But Roper, who said he was fired before by "evangelical narrow-mindedness" because there was a view that he was communist, has hit back hard, arguing that he does not owe anything to the JEA and, therefore, not afraid of any possible repercussion which might arise from his stance.

According to Roper, Bailey is in no position to counsel him as he is several years his senior in terms of ministry and considerably more well trained.

"This is a wide open secular society in which people take independent position of the State or the Church, or anywhere. They have never paid my bill one day and they can't start now. So they can take any position they wish.

"I am not afraid of them or anyone else. I do not take positions under duress, under threat, or for reward, I take the positions I believe in. If they wish to challenge me or to persecute me, I will not run away," added Roper.

He charged that the JEA is "a little club with a few people who hoist themselves on a petard by going to breakfast meetings and see if they can have access to government and governors general".

"They do nothing in the society. Let them review the 50 years that they have been here. They are a privileged bunch and the society has changed and they are not prepared to deal with it."

The former talk show host and frequent media contributor said he expects Bailey and others will eventually see the errors of their ways, as while homosexuality is a lifestyle option that the Bible does not approve, it is not a criminal act but a moral one.

"I'm sure some of them have other reasons that fuel their passion, and I wish they would be brave enough to say where they truly stand by virtue of who they are, what their doctrine says, and what the Bible says," said Bailey.

"The buggery law must stay. There is a hidden agenda by a group of persons who see this as a stepping stone to another agenda, the LGBT agenda, and ultimately the legalisation of homosexuality, which we all know and are trying to protect as best as we possibly can.

"If they are really concerned about the LGBT, why aren't they going down to New Kingston to deal with the 'gully queens' who have nowhere to live? Because those aren't the people they are representing. They represent those who are in the high-class echelon of the society who, by virtue of their institutionalisation, are attacking the healthy institutions of life and the society like the family which is at stake," charged Bailey.