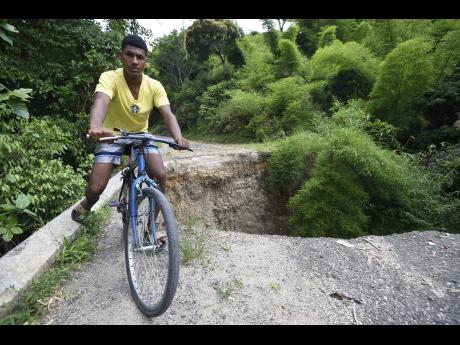 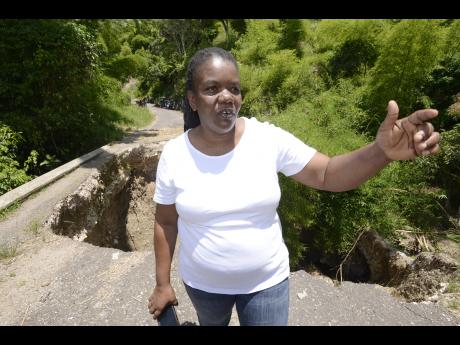 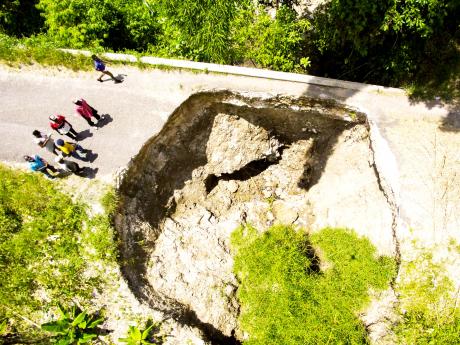 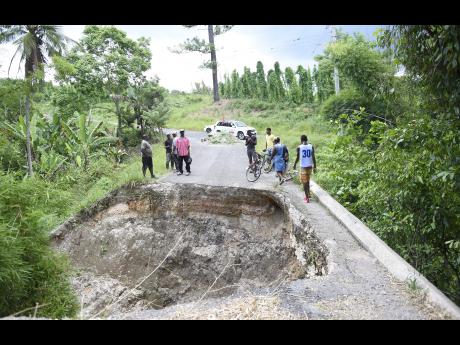 Dozens of residents of Dykes Hill and surrounding communities in northern Clarendon are appealing to the authorities to fix the main road in area so they can stop fearing for their children, avoid paying a 400 per cent increase in fares, and easily transport goods to the market.

A culvert beneath the Dykes Hill main road crumbled during the mid-May rains, causing the earth to collapse and almost splitting the roadway, save for a connecting, narrow and treacherous strip a few inches wide.

Dykes Hill is located near the Sanguinetti community, almost three miles from Spalding. It is one of the communities worst affected by the mid-May rains that devastated the parish - one of 10 affected - and left several communities marooned for days.

Lorna Nevers, a teacher, said even though the National Works Agency (NWA) has provided access via an alternative route, residents still feel trapped, as they can hardly afford the increased costs, since the regular route through Sanguinetti remains inaccessible.

"We caa live like dis. We cannot continue like dis. It's depressing," she told The Gleaner, which was taken on a tour of the area last Thursday by residents.

"I understand that NWA came here with the member of parliament, Richard Azan ... . They said this road would be a priority. It's now two months after and nothing.

"So when you come from Spalding or even Frankfield, you have to stop here, and if you have load, [you have to make] several trips across," she said.

Frankfield and Spalding are the closest major towns to Dykes Hill, to which, according to the residents, the journey takes about 15 minutes when they travel through Sanguinetti.

The alternative route through Coffee Piece, Ritches and White Shop, they say, takes about one hour to traverse.

But they say the road condition is not much better.

Three farmers said they have had to struggle to transport their goods as they cannot afford to use the Coffee Piece route.

"When the truck fi come fi di goods dem, nuh road nuh deh yah. We have business place over here, and when the taxi dem come, a right here so dem have to drop di goods," said, Trevor Marshall, 63, as he pointed to the damaged roadway.

"We nuh have no other road. Di farmers dem over there want dem produce fi come, but no vehicle fi carry dem out."

There was much lament for the children, too, who have to cross a gully, whose water was channeled through the culvert. Doing that each time forces them to navigate the thick vegetation to make their way from Dykes Hill to the nearby Sanguinetti Primary School or institutions in Frankfield or Spalding.

That is a problem for parent Beatrice Alexander.

"If the rain falls we have to go down in the river and dem haffi stay a Sanguinetti till it draw. If yuh sick a night, yuh fret. We need something fi done," she said.

"This road doesn't affect the school, per se, but I am affected," said Doreen Morris, a grade five teacher at the Coffee Piece Primary School.

"I can't drive on this road to school. I have to take the longer route, which is the Ritches route, and the road is bad up there."