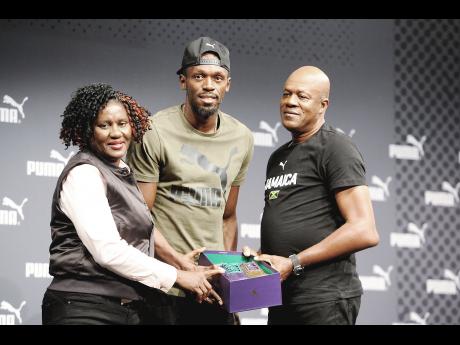 Ricardo Makyn
Usain Bolt (centre) being presented with his new Puma spikes by his parents Wellesley and Jennifer Bolt at a press conference held in his honour at The Brewery in London, England, yesterday. German sportswear company Puma went all out for the affair as it celebrated the career of one of its most recognisable and impactful brand ambassadors ahead of this week’s World Championships.

A shiny new pair of spikes; tributes from some of the biggest names in sports and entertainment, such as Samuel L. Jackson, Idris Elba, Virat Kohli and Thierry Henry; a hair-raising video presentation; and even a confetti shower at the very end.

German sportswear company Puma went all out as it celebrated the career of one of its most recognisable and impactful brand ambassadors.

As Usain Bolt effortlessly brushed the purple and gold strands of confetti from his shoulders at the end of an hourlong media event at The Brewery in Central London yesterday, there was a sense of calm confidence that belied the test he must face in a couple of days - his latest and last examination as he hunts a 12th World Championships gold medal.

Like he has several times before, Bolt arrived ahead of this Friday's World Championships inside London's Olympic Stadium with a bit of a question sign floating over his head.

Is he still the fastest?

The sprinter did not equivocate.

"Yes, without a doubt! You know if I show up at a championship, if I am here, I am fully confident and ready to go," Bolt assured.

He even has a few suggestions for the headlines following Saturday's 100m final.

"'Usain Bolt is retired unbeatable over individual event' - that would be the headline, hopefully. 'Unbeatable, unstoppable, Usain.'"

In truth, he hasn't really looked unbeatable this season, so much so that every upcoming athlete seems confident that he will be the spoilsport in what we might as well call 'BoltFest' on Saturday.

His times this season - 10.03, 10.06 and 9.95 seconds - wouldn't normally scare anyone, but as the Jamaican pointed out, he isn't just anyone, and he has been in this situation before.

"[That] 9.95 seconds in my last race shows that I am going in the right direction and these two races in the 100m rounds - those always help me, so I am not worried," said Bolt.

"It's a championship, it's a final, it's all about who can keep their nerve and who is ready to challenge. I have been here many times and I know I am ready. It's go time, so let's go!"

He added, "I'm ready, I'm always excited when I get to a championships, I am finally here now, and finally will be in the village and get that hype and feeling, and I'm excited and looking forward to it. I guess I'm the underdog for some reason, that's what I keep reading and what my team keeps telling me, so I have to prove myself once more."

Bolt is back. He won't go quietly, and by all accounts, he is ready to unleash some real speed this weekend.

Either way, the headline writers should have a field day.