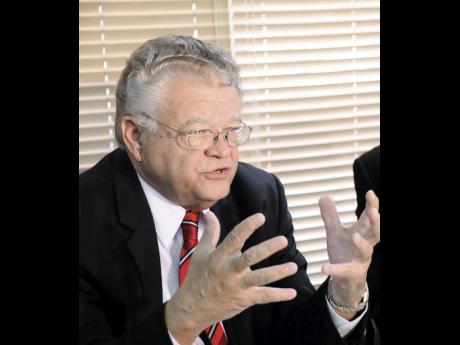 Karl Samuda said his industry, commerce, agriculture and fisheries ministry is yet to get an undertaking from Chinese firm COMPLANT, the parent company of the Pan Caribbean Sugar Company, if they will be willing to offset the cost of operating Monymusk Sugar Factory for the 2017-2018 crop year.

"That is what we are pursuing vigorously now," the minister told The Gleaner during his recent tour of the Appleton Estate in St Elizabeth.

"We have tried exhaustively to have a meeting with them, to let them understand that while we are prepared to assist to manage their facility for them, they must pay back the cost or a portion thereof, because the Government of Jamaica is not in a position to underwrite the cost of maintaining an asset that is truly belonging to the Pan Caribbean group."

The Government was forced to take over the operation of the Clarendon-based factory after the Chinese decided to shutter operations for this crop year and concentrate on their 60-tonne facility at Frome in Westmoreland.

According to a senior source at the agriculture ministry, after the Government took control of Monymusk via the Sugar Company of Jamaica Holdings Limited, several attempts were made to engage the Chinese in a discussion about the future of the estate, but to no avail.

"We have not been able to even settle on a teleconference discussion, so presently, we cannot speak definitively on the future of Monymusk," the source told The Gleaner.

Efforts to contact Liu Chaoyu, the local-based chief executive officer of Pan Caribbean, or her interpreter, Diana Sun, have been unsuccessful.

In his Budget presentation earlier this year, Samuda revealed that it was costing the Government $250 million to manage the Monymusk Sugar Factory, which, if closed, would see more than 800 people losing their jobs - a devastation for the economy of Lionel Town and other villages along the Vere Plains.

After acquiring the Monymusk and Frome factories, via a government divestment exercise, the Chinese invested more than US$260 million to renovate the factories and fields at both estates.