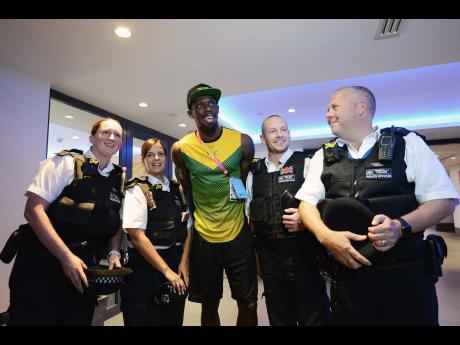 Ricardo Makyn
The world’s fastest man, Usain Bolt (centre), took time out to share a moment with officers from the London Metropolitan Police Department as the Jamaican team headed out for training at the Grange Tower Bridge Hotel in London, England, yesterday. Bolt is hoping to close his career on a high tomorrow in the IAAF World Championships men’s 100m.

The beginning of the end.

That's what this evening's IAAF World Championships men's 100m heat represents for iconic Jamaica sprinter Usain Bolt, who will close the lid on an unmatched career with his final individual race this weekend at the London Stadium.

Bolt and his legacy have been the highlight of the discussions and promotion around the championships. Track and field's golden boy is turning the final pages of a story of glitches, gold, and glory that not only captivated the world, but changed the sport forever.

For his part, Bolt simply wants to get on with it, labelling this, his final 120 or so strides and 30-odd seconds as "just another championship".

Of course, it isn't.

The 4x100m relay is likely to follow for Bolt and his Jamaican teammates, but at 9:46 p.m. tomorrow evening (3:46 p.m. Jamaica time), Bolt, presuming that he navigates the two rounds prior, would have completed his final individual race - 19 years after his first - a sprint to the end for a box of food at Waldensia Primary in Trelawny.

"Honestly, I look at this as just another championship," Bolt said of his swansong. "I try not to look at it as the last one because I don't want to put any extra pressure on myself. I'm coming here to win, to execute, and to do my best as always. That's the way I look at this.

"I'm feeling good. I'm feeling better after every race, and everything is going good. I got good treatment at the doctor (in Germany), and that's the good thing. When you come to a championships and know you're healthy, and, I wouldn't say at my best because I'm not at my best, but I'm where I want to be," Bolt said yesterday in an exclusive interview with the RJRGLEANER Communications Group.

"I'm looking forward to giving Jamaica a great birthday present as always. I'm going to come through, as always, and it's always a pleasure to make Jamaica proud."

He added: "In Monaco, I didn't feel as powerful. On the commentary, they said I looked lazy, and that's how I felt, but it's one of these things. Sometimes you have to get rid of that negative energy, but I know I always feel better after going through the rounds."

Bolt will be joined in the men's 100m heats by training partner Yohan Blake, Julian Forte, and Senoj-Jay Givans, with Blake, in particular, showing signs of his old self, with those close to the 2011 World Champion expecting him to provide the biggest threat to Bolt.

This was the case before it was revealed that Canadian AndrÈ De Grasse had to be withdrawn from the championships after picking up a season-ending hamstring injury on Monday in training.

Bolt didn't have much to say on the development but offered some words of advice to the young sprinter.

"It's always about listening to your coach and taking the doctor's advice and taking your time to recuperate while working as hard as possible to get over the injury because sometimes when you rush it, it only makes things worse," said Bolt.

"I hope that he (De Grasse) takes heed, takes his time to heal, and, hopefully, everything goes smoothly so that he can get back on track next season."

Also in action today will be hotshot discus thrower Fedrick Dacres, whose 68.88m is the second-best mark on the planet this year; as well as Traves Smikle; plus, long jump pair Damar Forbes and debutante Ramone Bailey.