Bolt should coach after retirement 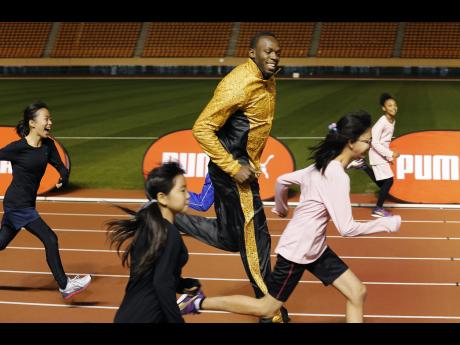 File
Usain Bolt of Jamaica "competes" with children during an athletic clinic at the national stadium in Tokyo, Japan in 2013

As Usain Bolt prepares to close one chapter of his life on the track, Jamaicans have made it clear they want to see him go no further than the sidelines where he would help mould the careers of upcoming athletics stars.

A Gleaner-commissioned Bill Johnson poll, conducted islandwide between June 9 and 11 and which asked respondents what the Jamaican track legend should do after retiring this summer, found 23 per cent of persons saying he should open a training centre and go into coaching.

Eleven per cent said Bolt should do whatever he wants, four per cent want him to get married and start a family and one per cent want the world's fastest man to follow in Juliet Cuthbert-Flynn's footsteps and go into politics.

However, she believes that he should just listen to his heart.

"I really can't say what he should do. I really don't know Bolt that well," Cuthbert-Flynn said with a laugh.

"But I think what I would suggest is for all athletes, whenever they retire - they can excel in more than one thing. I think we all have the talent to excel in more than one thing. He needs to just find that thing that he has a passion for, just like track and field. We all have that one passion, he just needs to dig deep. I think he knows by now, what that passion is. I think whatever it is that he chooses to do, if he does it with the same passion that he did for track and field, I think he'll do fantastically well."

Germaine Gonzales, who is a close friend of Bolt, said he was unsure of what he should do after retirement, but he would like to see him giving back to the sport as a coach.

"He should definitely give back to track and field, a sport which has done so much for him," Gonzales said.

"It would be only fair for him to give back. There are lots of ways he could give back. He can use his power to get the infrastructure more developed.

"For Jamaica to have so many record holders, Olympic and world champions, I think we need better infrastructure in terms of tracks. We have maybe four or five tracks in the entire island, which is not good for a country that is so big in track and field internationally. He should use his celebrity status and power to try and develop the sport."

Gonzales continued: "He can also start his own club or build a training camp to develop the young talent coming up. A lot of people look up to him and believe in him and he has proven that he knows what he is doing. He is the greatest sprinter and track athlete of all time. if he doesn't do anything else, I think that is something that he should do."