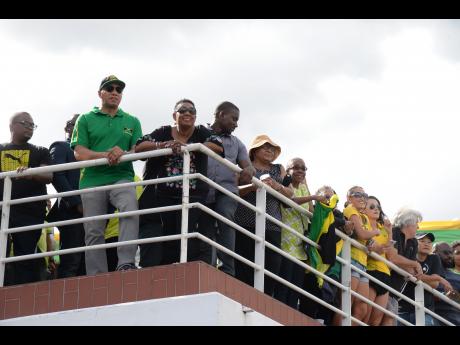 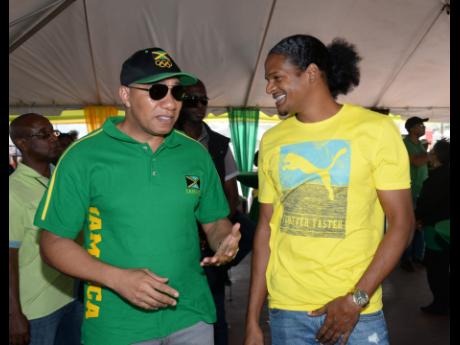 Jermaine Barnaby
Prime Minister Andrew Holness (left) and Olympian Jermaine Gonzales in Half-Way Tree before the start of the men's 100m final at the IAAF World Championships in London.
1
2

Minister of Culture, Gender, Entertainment and Sport, Olivia Grange, has expressed immense pride after watching Usain Bolt and Yohan Blake compete in the men's 100 metres at the IAAF World Championships in London.

Grange and Prime Minister Andrew Holness were among hundreds of Jamaicans who gathered in Half-Way Tree to watch the race on the giant screen.

Bolt finished third in what was his last individual final.

No need for sadness

According to Grange, while all Jamaicans wanted a different result, "there is no need for sadness as Usain Bolt has done well for Jamaica".

Grange added: "Usain has caused, and will continue to cause, us to walk with our heads held high as Jamaicans. In terms of his performance on the track, he's had no equal and I'm very proud of and grateful for all that he's done. He will forever be our champion."

The minister has also sent best wishes and messages of encouragement to the members of the Jamaican team at the World Championships, including Yohan Blake, who finished fourth in the 100m final, and Julian Forte, who made it to the semi-finals of the 100m.

Grange also encouraged Fedrick Dacres and Traves Smikle, who finished fourth and eighth, respectively, in the discus throw final, and Damar Forbes, who finished 12th in the long jump.