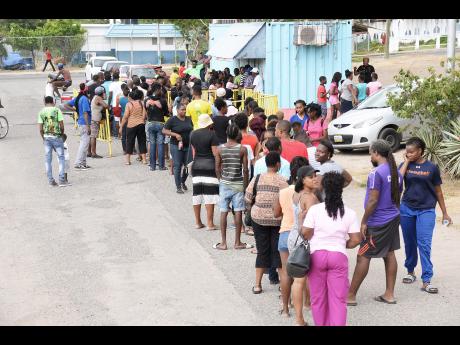 Jermaine Barnaby
Scores of persons in line at the National Stadium yesterday trying to get tickets for today's Grand Gala celebration.

Scores of persons yesterday flocked the ticket office at the National Stadium trying to secure tickets for the Independence Grand Gala slated for today.

Culture Minister Olivia 'Babsy' Grange has vowed that today's celebration of the island's culture will be grand, and scores of persons are desperate to get into the National Stadium.

According to Grange, 1,000 performers will participate in the celebratory event, including top artistes Nesbeth, Romain Virgo, Gyptian, Kukudoo, and Kevin Downswell.

Popular artistes G Whizz, Mystic Redemption of Rastafari and the Dragonaires are also down to perform. Additionally, the show will include comedy, dance and a mass choreography enhanced by lighting and special effects. There will also be fireworks.

"Our aim is to bring the nation together with this exciting cultural event and to inspire our people to higher levels of productivity, economic growth and prosperity," said Grange.

The Grand Gala is free to the public; however, patrons will require a ticket to enter the National Stadium.

People who are unable to get a ticket are invited to a viewing party at the Ranny Williams Entertainment Centre or to watch the live broadcasts on television and online.

Emancipation and Independence activities this year are being celebrated under the theme, 'Let's Get Together and Feel Alright'.