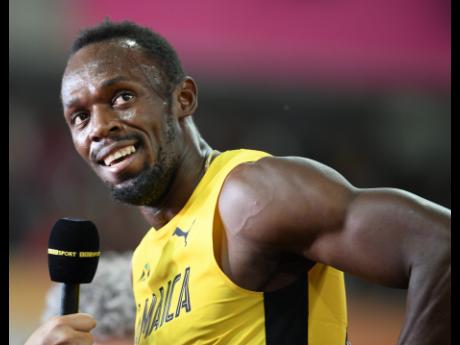 Placing tremendous confidence in world record holder Usain St Leo Bolt, Jamaica's Minister of Tourism Edmund Bartlett says the athlete, who has taken on the moniker 'The Legend', is to become the face of national activities.

"Jamaica has in no way lost confidence in his ability to represent the country as an ambassador and we intend to utilise him as the face of national activities," Bartlett told The Gleaner in London on Sunday, hours after Bolt earned a bronze medal in finals of the 100 metres race at the IAAF World Championships.

In fact, he revealed that the UNWTO (United Nation World Tourism Organisation) was in discussion with Bolt, inviting him to play the role of ambassador for the November 27-29 conference being held under the theme 'Building Partnerships for Sustainable Tourism for Development', at the Montego Bay Convention Centre.

Once confirmed, Bolt, who retires from athletics after the world games, will join the ranks of a number of other special UNWTO ambassadors.

So far, more than 50 countries and 200 delegates have registered for the event, which will bring together three critical partners in tourism, air, land and sea.

According to the tourism minister, multilateral funding agencies, academics and non-governmental organisation will focus on the future of tourism, and its potential as an instrument of job creation and inclusive growth.

With others such as the Caribbean Tourism Organization, the Caribbean Hotel and Tourism Association and the World Tourism and Travel Council also supporting the event, Bartlett is satisfied that "this will be a conference like no one has ever seen before".

There will be significant spin-offs for local and Caribbean tourism, particularly so for Jamaica, which will be showcasing to global tourism partners a special gastronomy prototype in rural Jamaica as well as hosting a major awards ceremony honouring some of the best tourism leaders in the region.

The International Year of Sustainable Tourism for Development marks an important milestone in the 2030 Agenda and in the progress towards the achievement of the Sustainable Development Goals, in which the tourism sector appears as a key tool. Special ambassadors aim to provide a global focus to the International Year, as well as to highlight the commitment of leaders and prominent personalities in the development of sustainable practices in the tourism sector.

- Mai bint Mohammed Al-Khalifa, president of the Bahrain Authority for Culture and Antiquities.

- Michael Frenzel, president of the Federal Association of the German Tourism Industry.