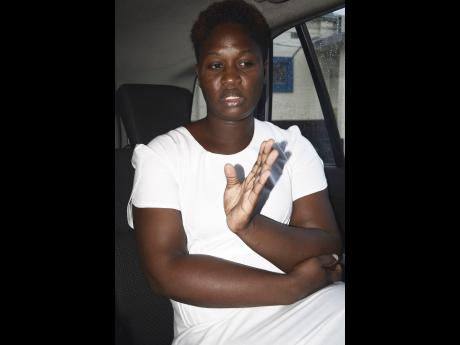 Errol Crosby
Tucker: It is good when you can lead but, when persons actually see the same mission and expect the same outcome, it makes me feel blessed to be around persons that care.

The bravery showcased by registered nurse Davia Ramona Tucker, during a fire inside the Intensive Care Unit of the Bustamante Hospital for Children earlier this year, has won her a national badge of honour, an award she attributes to her colleagues and other staff members at the institution.

She was able to gather members of the medical and security staff, particularly security supervisor Clive Baker, who helped her to rescue the young patients.

Tucker said she experienced moments of "fear", but had to stick to the task of protecting the children.

"We had a fire and I was one of the persons who had an instrumental leadership role during the incident, but it was definitely team work and that is the part that really touches my heart the most," she said.

"On that day, we were working when someone smelled smoke. We checked and noticed that a part of the unit was on fire. The porters in the unit came together, Mr Borrows and Mr Dennis. They were able to put out the smoke. In addition, persons from inside and outside came with fire extinguishers, but when the fire was put out, the unit was overwhelmed with dark smoke," she told The Gleaner. yesterday.

From there, she was forced to use a piece of metal to attempt break one of the windows inside the unit.

"There were about four patients. Because of the smoke, something came to me to try to get one of the windows open, so I tried to break the glass but I wasn't strong enough. Especially the security supervisor, he came and got the other security guards involved and they came and helped us get the patients out of the unit. I feel excited. I am proud to know that they have the heart to come together to make the sacrifice, seen or unseen, and they didn't hold back."

She added: "It was a good size fire. When I started asking for help, persons could have said that I am not going to get myself hurt. It is good when you can lead but, when persons actually see the same mission and expect the same outcome, it makes me feel blessed to be around persons that care. The award might seem like it is just for me, but it is all about them. I could not have done it without them!" a humbled Tucker told The Gleaner.

Five other individuals have listed to receive honours for gallantry.

Ramone Peart, Jamawno Riley and Jermaine Riley were all instrumental in saving their neighbours, who were trapped in flood waters over in Sunnyside in Linstead, St Catherine in May.

Howard Garcia rescued a man from the murky and treacherous waters of the Rio Cobre on May 16, and Ann Kay Martin was honoured for saving the lives of her three younger siblings from a fire at their home. She escaped with miniors burns to her ear and left arm.