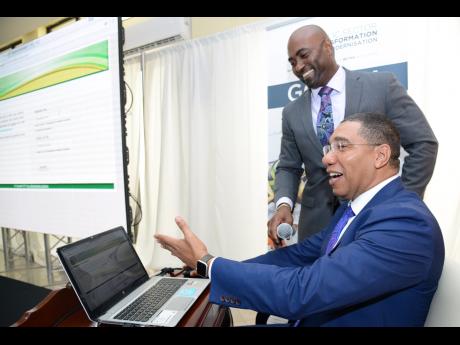 Prime Minister Andrew Holness says that a data protection bill is to be tabled in Parliament in the coming weeks, as a security component to the just-launched Government of Jamaica portal, gov.jm, and for the forthcoming National Identification System (NIDS).

He was speaking at the launch of the Government of Jamaica portal, gov.jm, yesterday.

"I am going to bring to Parliament soon the Data Protection Bill because people are still concerned about their information online, even more so as we bring online this portal and NIDS," Holness said.

He said, however, that while pleased that Jamaica has finally had the portal fully implemented, he was frustrated with the length of time it took to become a reality.

"Where we are today, after talking about egov and gov.jm, is that I believe we are about seven years into this project. I am not impressed at all that it has taken us so long to do this," Holness said.

The prime minister lamented Jamaica's fall in the 2016 United Nations e-Government Development Index, adding that the portal would now support a rise back up the ranking.

"We have fallen 20-odd places in the global rankings. We have just deteriorated. The fact is that other countries have done much more than we have and with that, we have fallen some 20-odd places, and now we're trying to catch Trinidad and Panama," he said.

Jamaica has over 250 government ministries, departments, and agencies covering a vast number of services that will be brought under one umbrella with the benchmark portal, which will also act as a one-stop shop for the accessing of government services.

gov.jm will become the Government of Jamaica's online gateway to all government information and services. As the website evolves, it will be the central place to perform online transactions with the Government, find information on how and where to access government's services and receive feedback to queries.

The project is being led by the Ministry of Science, Energy and Technology through its technology-implementing entity eGov Jamaica Limited and the Office of the Cabinet under the Public Sector Transformation and Modernisation Programme.