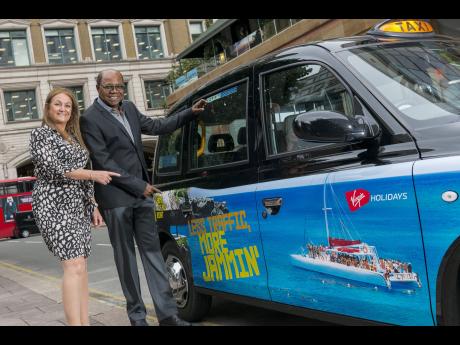 Contributed
Minister of Tourism Edmund Bartlett gets ready to board one of the 150 Jamaican-themed black taxicabs emblazoned with the moniker ‘Less Traffic, More Jammin’, along with Elizabeth Fox, regional director, Jamaica Tourist Board UK/N Europe partners.

Minister of Tourism Edmund Bartlett says Jamaica has Barbados firmly in its cross-hairs and could soon replace that Caribbean country as the leading destination for British tourists to the region.

Bartlett, who was speaking at a dinner for travel-industry executives in London on August 8, added that Jamaica had been campaigning aggressively in the United Kingdom (UK) marketplace and would not relent until it has sole position of the number-one destination for British travellers to the Caribbean.

"Jamaica is hot. With a repeat-visitor rate of 40 per cent and a surge in wedding and honeymoon UK vacationers, including Prince Harry and dozens of his friends coming to Jamaica recently, we can easily eclipse our friendly neighbour, Barbados, commonly known as 'Little England', as the number-one destination for Brits in the Caribbean," Bartlett noted.

Last year, Jamaica received 210,000 tourists from the UK, just 8,000 less than the 218,000 that visited Barbados. It is also worth noting that while the United States is Jamaica's main source market, the UK is traditionally Barbados's main tourist market.

Bartlett, who was speaking at the popular Boisdale Restaurant in London's busy financial district, Canary Wharf, charged UK travel executives to build on last year's 5.8 per cent growth and the near 40 per cent growth in British tourists visiting Jamaica over the last three years.

"We want to change that equation," he added. "We want to rule the roost in the Caribbean, and we are within striking distance. I know the best is yet to come, and we will accomplish great things together."

The tourism minister is leading a small team of officials to London for a series of engagements with industry stakeholders across the airline, hotel, tour operator, travel agency, and media sectors. The visit is timed with the IAAF World Championships at the Queen Elizabeth Olympic Park in Stratford.

As part of its promotional strategy, the Jamaica Tourist Board (JTB), in conjunction with travel-industry partners, had 150 of London's famed black taxicabs emblazoned with the slogan 'Less Traffic, More Jammin', coupled with colourful Jamaica-themed images depicting an inviting scene of the island and on full display throughout the British capital.