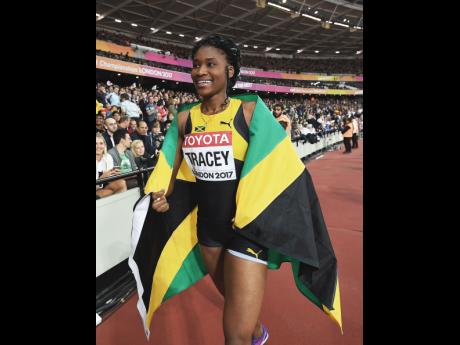 Six years after her first World Championships appearance as a promising 19-year-old in Daegu, 400m hurdler Ristananna Tracey finally made her way on to the podium after a powerful, well-timed 53.74 seconds secured her the 2017 World Championships bronze medal at the London Stadium last night.

It was the best race of her life - her first time dipping below 54 seconds.

Her exclamation - which arrived after she outpowered multiple medallist Zuzana Hejnova off the final hurdle to finish behind gold-medal winner Kori Carter, 53.07, and Dalilah Muhammad, 53.50, (both from the United States) - was testament to her own acknowledgment that the time had come for her to deliver.

Tracey's road to the medal podium was not as straightforward as it, perhaps, seemed to most in 2011 when her big-hearted effort, despite a broken hand, gave her a number of admirers in the South Korean city.

Several injuries and two coaching changes after that South Korean introduction, the one-time schoolgirl star has become the latest in a line of Jamaican 400m hurdles medal winners at the World Championships.

Tracey's bronze is the first for Jamaica since Melaine Walker's silver at that same 2011 installment and Jamaica's sixth overall in the event.

Since the 2007 World Championships in Osaka, Japan, there has been at least one Jamaican in every women's 400m hurdles final, with the island previously winning one gold, two silver, and two bronze medals in the event here.

Now Maurice Wilson's first individual medallist at this level, Tracey is not only proud to continue the country's impact, but is thrilled that she is beginning to match her ambitions and talent with championship hardware.

"This means that Rista is back, and I am confident, and I believe in my coach and the programme, and I'm just looking forward to growing from here."

The 25-year-old, who has been sharp and assured throughout the championships, following up her first-round win in the heat with another solid win in the semi-final stage, had really been showing signs since last season that she had turned a corner in her career.

Tracey, who made the semis at her first two World Champs, failed to get out of the heats two years ago in Beijing.

However, she bounced back at the Olympic Games in Rio de Janeiro in 2016, finishing fifth in the final, like she did last night, running her best race in the final - 54.15.

"I feel great! This means that Jamaican 400m hurdling is building again, and I think we will do great in the future," said Tracey, who added that she was confident that she would register a personal best here.

Jamaica now has one gold and two bronze medals, with three days of competition to come.