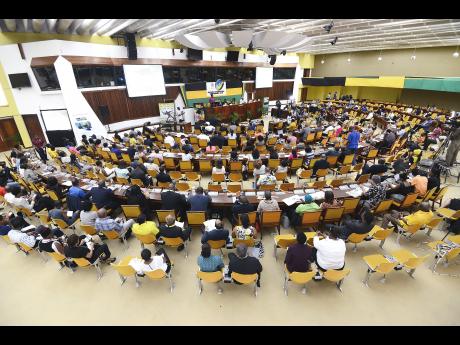 File
Ninety-three per cent of attendees at the recently concluded Jamaica Diaspora 55 Conference said it was worthwhile.

The recently concluded Jamaica Diaspora 55 Conference has received high marks from the majority of persons who attended, with 93 per cent saying it was worthwhile for them to have attended.

A post-conference survey done by pollster Bill Johnson, conducted on behalf of conference partner Jamaica National, found that only five per cent said that it was a waste of time.

When asked what they liked about the conference, participants listed good topics (43 per cent), good and engaging panellists (24 per cent), and well organised (20 per cent) among the main positives.

But it was not all applause for the organisers as persons pointed to several areas that they thought could be improved when the conference is repeated in 2019.

They argue that too many sessions were conducted on the proverbial 'Jamaica, or soon come, time'. The Jamaica Conference Centre, which hosted the majority of sessions, was deemed too warm, with inadequate air conditioning; not enough opportunities for dialogue; and a disorganised registration process.

The Jamaica 55 Diaspora Conference was held in Kingston from July 24-26. The Johnson team polled 240 participants before the conference, with 130 post-conference interviews.

Six out of every 10 respondents were attending their first Diaspora Conference.