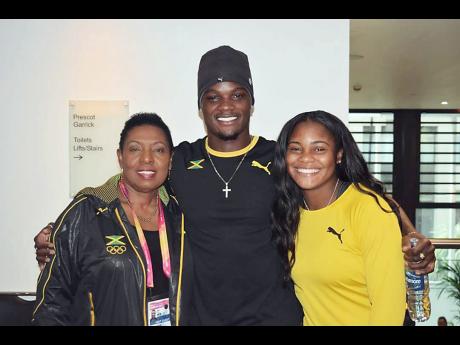 Sports minister Olivia Babsy Grange shares lens time with gold medallist Omar McLeod and 100m hurdler Yanique Thompson, during a visit with the athletes at the athletic village at the 2017 London World Championships.

Minister of Culture, Gender, Entertainment and Sports Olivia 'Babsy' Grange remains upbeat and confident in the country's track and field athletes, hours after visiting the team in London.

"We had an extensive discussion on the way forward, and the spirit in the camp is high. The team is positive, in spite of some disappointments," she said.

Recognising that the team's performance is in a dip period, she said the next crop of athletes is poised to do well.

"We have excellent talent coming up, as the Usain Bolts move on. In a way, it's that period of transition," she stated, adding that she was not overly worried about the outcome of the IAAF World Championships.

"In the next World games, we expect to do great, and by the next Olympic, we will be exploding," she told The Gleaner.

The plan, the minister said, is to fast-track the Herb McKenley mid-island programme so athletes can have that facility instead of going into Kingston, "ensuring there is stronger access to medical support," she said, expressing concerns that some of the athletes are training while injured.

The ministry, she said, will embark on a nutrition and social well-being programme in collaboration with the Jamaica Athletics Administration Association (JAAA).

Accordingly, a delegation from China is to assist the island in a number of disciplines, such as synchronised swimming and ping pong. "They will take a few of our coaches for training," she revealed.

According to Grange, team manager Ian Forbes, a vice-president of the JAAA, who has responsibility for development, is very upbeat and optimistic about the future.

Lauding the legend, Usain Bolt, she said there will be no one else in history like Bolt.

"We are proud of him. Omar McLeod is a young star on the rise, so is Elaine. I want to impress on our athletes the importance of staying focused, that they are to continue to do their best to represent their country and that the people of Jamaica truly love and respect them," said the minister.

The sports minister visited the athletic village with Olympian Merlene Ottey, who also gave the team a pep talk.