Mayhem off the ‘Maxfield’ - Four killed, 10-year-old among two injured as gunmen strike in Whitfield Town 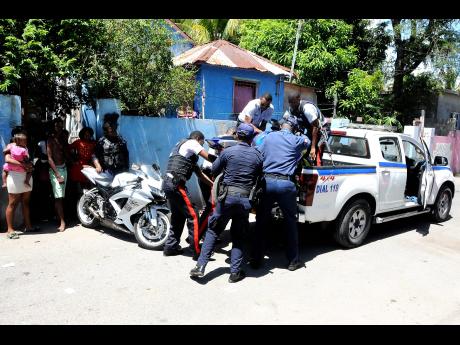 Lionel Rookwood
Residents watch as police from the St Andrew South Division seize one of the motor bikes which reportedly belonged to one of four men fatally shot in Whitfield Town, St Andrew yesterday morning.

Residents of sections of Whitfield Town, in the troubled South West St Andrew community, are on edge today as they say a gang feud, which has been raging in the area for weeks, escalated yesterday with the shooting of six persons, with four succumbing to their injuries.

Yesterday, several residents told our news team that they are bracing for reprisals despite promises from the police that they will be increasing their presence in the area and hunting for the marauding gangsters.

Head of the St Andrew South Police Division Arthur Brown has accepted that the division has seen an increase in violence in recent days, as he told The Sunday Gleaner that the cops will be doing all that is necessary to reduce the gruesome incidents.

Murders up 95 per cent

Official police statistics released last Sunday put the murder total in the division at 79, an almost 95 per cent jump over the 39 recorded in the corresponding period last year.

Shootings were also up by 45 per cent from 64 last year to 93 as at August 5 this year, and the women and children are not been spared by the criminals.

In the latest incident in the division, a 10-year-old girl was among six persons who were shot in Whitfield Town.

Four of the victims succumbed to their injuries, while the child and one man are in hospital with serious injuries.

According to Brown, yesterday's incident happened between 1:30 and 3:30 a.m., but he was not ready to join the residents in blaming it on gang violence.

According to Brown, while there might be evidence of gang violence, investigators were yet to confirm a motive for the killings.

"I wouldn't want to put it down to that (gang violence) because, unfortunately, some persons who weren't involved got caught in it," said Brown as he confirmed that the area was tense and residents are living in fear.

"We have seen increased criminal activities in the

division since the start of the year. However, we are trying as best as possible to cauterise whatever exists in the division," added Brown.

He urged residents to assist the police with whatever information they have.