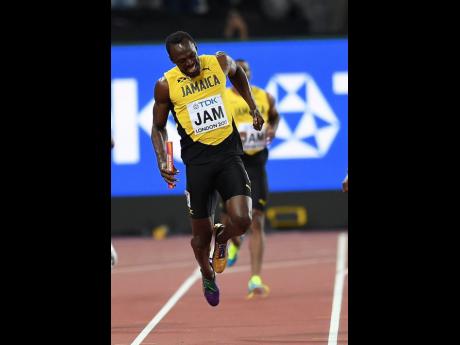 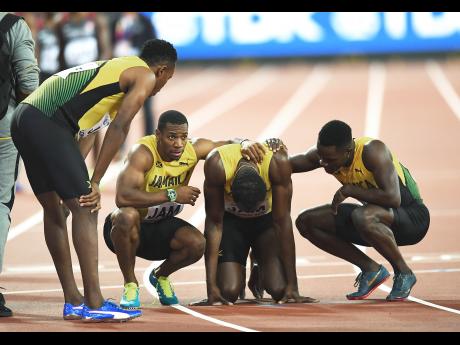 Ricardo Makyn
Usain Bolt (second right) being consoled by his team members (from left) Julain Forte, Yohan Blake and Omar McLeod after he pulled up in the final of the men's 4x100m relay yesterday. 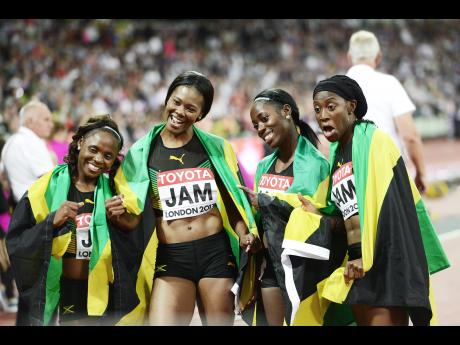 The last image was painful, but his lasting image is covered in gold.

Fifteen years after his golden introduction, Usain Bolt's farewell from athletics did not come with the fairytale ending that his glorious career deserved.

Instead, in a heap of pain after suffering an injury to his left hamstring during the 4x100m relay final, Bolt's final run at a major international championship quite eerily mirrored his first: the 2004 Olympics, where injury also crippled his campaign.

For the London Stadium crowd, confusion as they struggled to decide whether to celebrate Great Britain's first 4x100m gold medal at the World Championships or suffer with their hero, the sport's hero; who was saying goodbye after a generation-defining spell.

Eight Olympic titles, 11 world titles, 50 sub-10 second clocking in the 100m, and eight world-record-breaking performances and a lifetime of memorable performances propelled him to the forefront of global sporting celebrity.

Bolt would walk off the track to thunderous applause, with team doctor Dr Kevin Jones confirming the extent of the damage.

"It's a cramp in his left hamstring, but a lot of the pain is from the disappointment from losing the race. The last three weeks have been hard for him, you know. We hope for the best for him," said Jones.

However, The Sunday Gleaner was later informed that it was worse than a cramp and that he is to undergo an MRI today before being honoured at the stadium.

Jamaican sprint hurdler Omar McLeod was a picture of devastation. The gold medal winner requested a leg on the relay team specifically because he wanted to help ensure that Bolt received what he termed "a golden sendoff".

McLeod rushed out of the blocks on the opening leg, showing a bit of that 9.99 seconds speed over 100m, with Julian Forte powering down the backstretch after a smooth exchange. Yohan Blake's third leg was not as dominating, but when the baton settled in Bolt's left hand, the stage was set for another epic Bolt finish.

As was the case in the 100m final, it was not to be, as Bolt grabbed his hamstring and pulled up some 20 metres into his run.

"I felt like it happened to me," said teammate Forte, shaking his head. "I was at the corner when it happened, and I just didn't want to believe it. It is devastating. I wanted to be a part of the team that sent Usain Bolt off in style. It's unfortunate, and it's one of the things that can happen in sports," added Forte.

"It's heart-wrenching. I gave it my all, and I wanted Usain to leave golden. We wanted to win. It was really heart-wrenching. I don't know what to say, really," said an emotional McLeod. "I could not believe. I was shocked. I was in disbelief."

It was the first time since the 2007 World Championships that Jamaica was not winning the men's 4x100m relay.

Great Britain and Northern Ireland, 37.47, anchored by former Jamaica College schoolboy Nathaniel Mitchell-Blake, outlasted the United States' Christian Coleman to win his country's first gold in the event, with the Americans finishing second in 37.52. Japan was third in 38.04 seconds.

The women's 4x100m relay team of Jura Levy, Natasha Morrison, Simone Facey, and Sashalee Forbes was solid in securing bronze in a time of 42.19 seconds, finishing behind winners the United States, 41.82, and Great Britain and Northern Ireland, 42.12.